Conforming to their general policy of exploiting established talent in its most original and varied form, M. & T. have this time elicited from Santoshi a story which is emotionally and dramatically different from others. Santoshi heads a class by herself, the punch-gag comedian with originality in songs and punches unparalleled.

For Nirala, Santoshi has chosen a melodramatic and sentimental plot which examines the eternal antithesis of duty versus love which has, through all ages, sealed the fate of many a woman of this land.

The principal character of the story, a simple village belle Poonam (Madhubala), represents such a phenomenon. She has an aged and ailing mother (Leela Mishra) and a prodigal brother Tirchhe (Yakub) who is the common picture of a home in decadence.

Poonam is at that vulnerable turning point of life when all traffic signals inevitably lead a woman into the arms of a man. Fate decrees her to fall in love with Dr. Anand (Dev Anand) who inherits the strange legacy of an old car and the village where Poonam and her family live. But alas, the viles of Tirchhe disrupt the path of their love and she is bartered away to an aged Maharaja as his fourth wife.

It is a strange world of morbid horrors that Poonam steps into to live the best years of her life. For the palace is a hot-bed of intrigue and strifew. The ruling deity of the palace is the Maharaja's sister-a child widow embodying in herself all the social and ethical perversions conspicuous in a woman of such antecedents; while the Maharaja himself, is a symbol of life's most sullen tragedies. He is a person who has always sought, but never got, love for half a century of his existence-a person whose pleasures of life could be measured in terms of hides and heads of wild animals.

Poonam's dreams are shattered and affliction gradually takes possession of her. Her condition rapidly deteriorates.

Alarmed at her plight, the Maharaja summons Dr. Anand to take charge of her.

Poonam and Anand meet again, but under altered circumstances. But as the intrigues of the widowed sister and the polluted atmosphere of the palace would have it, various rumours, calling into question their relationship, are set afloat so that Dr. Anand is forced to leave the palace by Poonam.

Meanwhile the Maharaja vaguely begins to get fond of Poonam and when his sister forces the issue, he realises his responsibility for the deaths of his past three wives and decides in favour of putting a stop to the practice for good by eliminating himself. He orders Poonam to go to her father's place where, he thinks, she could live peacefully without molestation from his sister. Poonam, however, scents his intentions wrongly and believing that she is being turned out ingloriously decides to cross the threshold not alive but in the time-honoured Indian tradition - dead! 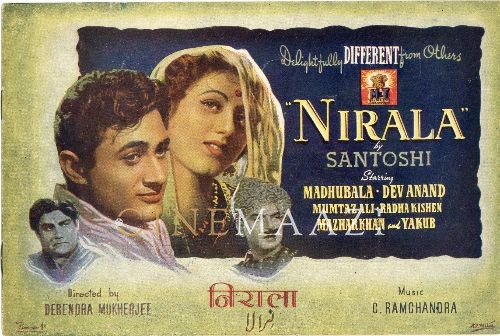