Ravi, an educated but unemployed youth tried his best efforts to get a job to support himself and his poor mother. All his attempts failed miserably yet Ravi never lost hope for he was determined to prove that he was a worthy son to his mother. Far from the city’s hub-bub, he got a job of a postman in a village called Sitapur. His happiness knew no bounds. After a long time he saw a beaming smile on his mother’s face. While discharging his duty of delivering the letters Ravi also obliged many illiterates by reading their letters to them. In doing so he met many unpleasant characters such as Raghu Rampuri who claimed that his poetry was more piercing than the Rampuri knife. Nathu, a Tangawalla, never talked straight and walked straight. Ravi’s boss, the Postmaster was a lazy lump. He preferred sleep to anything.

Amina, an eccentric old woman, was always looking forward to her only son’s arrival who out of fear ran away to Pakistan. His name was Rasoola. There were riots and Amina’s Rasoola lost his life. But Amina was always at the platform waiting that a train will bring his Rasoola back.

In the village the letters delivered by Ravi carried various tales of tears and laughters. Mohini, a young and mischievous girl always looked forward to Ravi’s arrival for a letter from her boy friend who was fighting on the front may be in the offing. But there was no letter from her lover. Every time he met Mohini, he started hesitating to say ‘NO’ to her.

Days passed by peacefully. Ravi was attracted to Mohini and slowly and gradually fell in love with her. Mohini was not aware of his amorous feelings.

One day Mohini asked for a letter from Ravi, he delivered one but it was not from the front. It contained everything what Ravi, the postman felt for Mohini but before he could do so, his dream castles came tumbling down. In due course news reached the village that Mohini’s lover was killed in action on the battle front. For Mohini, life without HIM was meaningless. The whole village looked deserted to her. Even the people whom she once loved so dearly looked strangers to her. The only course left for her to meet her lover was to commit suicide. But there too she failed as Ravi, the postman reached at the right time and saved Mohini from ending her life. When Mohini’s mother comes to know she turns panicky. Ravi, after a lot of persuasion from Mohini’s mother thought it would be in best interest if Mohini is sent to her uncle’s place where she would be looked after well. Time is a great healer. Here, too, a new turn took in Mohini’s life that changed the whole future. What was it?

Did Ravi her lover, come back from the front?

Did Amina get her Rasoola back to life?

To know all these questions you will have to see the film because we would not dare to tell you as in whose ‘Palkon ki Chhaon Mein’ Ravi, the post man heaved sighs in delight or desperation. 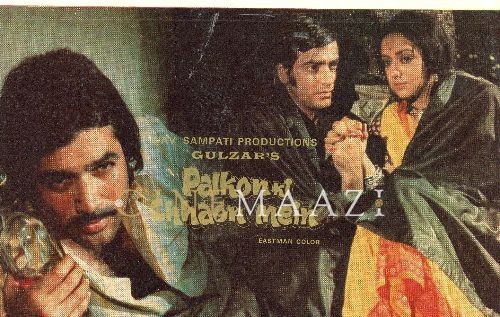