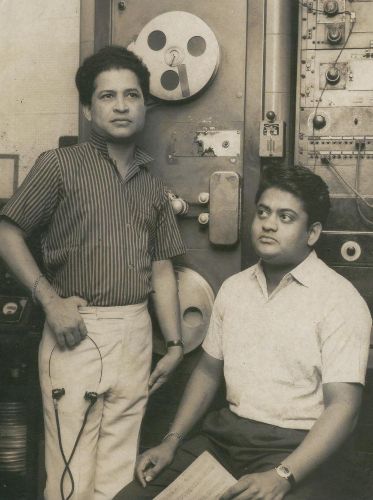 Laxmikant Shantaram Kudalkar was born in 1937. His father passed away when he was just a little boy, leading to him having to discontinue his studies. Fond of music, especially the songs of Shankar-Jaikishan, he developed his interest in the same, and started to learn the mandolin from his guru, Hussain Ali.

Pyarelal was born in 1940, the son of a trumpeter Ramprasad Sharma who also composed music for a few films in the late 40s. Encouraged by his father, he began learning the violin at a young age.

Their lives follow a similar path, in that each of them started to perform in orchestras, following which they graduated to being music arrangers, explaining the tunes to the instrumentalists and also deciding which instrument is to be played at which points in the course of a song. They had met at Sureel Kala Kendra, a music academy for children, run by the Mangeshkar family. Learning about their financially deprived backgrounds, Lata would recommend their names to music directors such as Naushad, Sachin Dev Burman and C Ramchandra. Hailing from similar financial backgrounds and being close in age, Laxmikant and Pyarelal ended up becoming very good friends. Spending hours at the recording studios, they would sometimes get work for each other, and also play together whenever the opportunity came by.

In 1953, they became assistants to Kalyanji-Anandji, working with them as assistants till 1963. They also worked as music arrangers for music directors such as Sachin Dev Burman as well as Rahul Dev Burman They branched out as a team in 1962, signed on by Bhojpuri filmmaker K Pervez for no less than four films. Unfortunately, the filmmaker ran out of funds, leading to the music director duo making their debut with Babubhai Mistry’s costume drama, Parasmani (1963). Their songs for the film, namely Hasta hua noorani chehra, Woh jab yaad aaye and Mere dil main halki si immediately caught attention, being catchy and sensational. They hit the big time with Rajshri Productions' Dosti (1964), which became a success owing to its hit songs such as Chahoonga main tujhe shaam savere and Rahi manwa. They won their first Filmfare Best Music Director Award for the film.

Their melodious music thus far was marked by dramatic orchestra flashes. With the onset of the new decade, their sound now changed to match the new trends. With the music directors faced with the option of either adapt or perish, they adapted swimmingly well. Staying ahead of the competition, they often led the change. Their songs ushered in interesting variations such as the speak-and-sing format in Achha toh hum chalte hai from Aan Milo Sajna, the disco feel they gave the bhajan-like Meri umar ke naujawano…Om shanti om from Karz (1980), and the pop vibe they gave the ghazal-type song Dard-e-dil dard-e-jigar. They were also often seen to incorporate the film’s title in their compositions in several films, a few instances of which include O manchali kaha chali from Manchali (1973), Anhoni ko honi kar de from Amar Akbar Anthony (1977), and Main tulsi tere aangan ki from the eponymous Main Tulsi Tere Aangan Ki (1978). They composed Indian classical music as well as Western music, achieving popularity for their folk tunes and semi-classical music.

It goes without saying that their compositions also dominated the popular weekly Hindi film songs countdown programme, Binaca Geet Mala, with no less than half the number of the 16 songs aired on the list invariably being Laxmikant-Pyarelal compositions. They have an astounding 245 numbers of Binaca Geetmala Final Songs, namely the songs compiled at the end of each year, to measure the popularity. No other music director could match their record numbers.

Post the demise of Laxmikant on 25 May, 1998, Pyarelal scored the music for a few films independently, under the same joint name.