This sweet name 'Panghat', lyrical as it sounds, is associated with many a romance, many a laughter, many a tear and many a tragedy. Whether it is a well or a river, lake or a tank, this place 'Panghat' where womenfolk come to fetch water is the witness of the heart-throbs and heart aches of India's womanhood.

Our story has a well at Shivpur which bears the name of Durgaprasad Chaturvedi, the father of Jamnaprasad Chaturvedi, a rich man of Shivpur. The well was given over for the public use. But this year when our story opens the town of Shivpur is feeling the shortage of water. Other wells of the town were almost exhausted, and this well was the only source of water supply. Time and again Jamnaprasad warned the people not to fetch water from his well. But the things went as usual.

The women of the town throng the well, the girls come with their pitchers, talk, sing, and make merry. The centre of all this merriment was Radha, the sister of Jamnaprasad Chaturvedi. Young, handsome this girl Radha is being teased by her fair friends who knew that her marriage talks were afloat, which fact is confirmed by the Post Card snatched from a Postman who came to give it to Radha.

This post card was sent to Jamnaprasad by Gangaprasad a wealthy merchant of a neighbouring city. He was to send his only son Kiran Kumar to Shivpur so that Jamnaprasad would see him and in turn show his sister to Kiran Kumar. Gangaprasad knew his son Kiran very well. Hence he does not disclose his intentions to him saying that Kiran is to go to Shivpur mainly to recover some outstandings from a merchant with the instruction to stay at Jamnaprasad's place.

Kiran is however, in a fix. He is to appear that night in a stage drama 'Panghat' organised by his club. He, therefore, sends his friend Mohan, the author of the Drama, to Shivpur, saying that he should go under the name of Kiran, as Jamnaprasad had never seen either of them.

Mohan reluctantly goes to Shivpur on a cycle. While passing by our above well, his cycle slips in the mud and he falls down. Girls laugh. Mohan feels awkward and annoyed.

Radha still laughs and teases him by not giving him water to wash out the mud from his clothes and goes away with the heart of Mohan. Ultimately her friend Bansari helps him and in turn he promises to make a new well in town after hearing the trouble of water shortage.

Again he dashes with Radha who comes from a by-way. Radha's pitcher is broken and she gets all wet. At home Tara, the orthodox wife of Jamnaprasad is angry with Radha for all this. Meanwhile Mohan comes to Jamnaprasad who is sitting out in the Verandah. He takes Mohan as Kiran and the misunderstanding starts. Mohan narrates his bad experiences at the well and the street hating the careless girl, not knowing that he had come to her own house. Radha recognises him and when she meets him in a room he is surprised and is still more surprised and puzzled by the gestures and talk of Radha who took him as Kiran, her would-be husband. Tara declared that the boy was quite good and Jamnaprasad should now write his final consent to Gangaprasad. Here again Mohan is moved by the women's entreaties to Jamnaprasad to allow them to fetch water from his well. Jamnaprasad strictly refused them, but Mohan intervened and pleaded for them.

In the evening Mohan and Radha again meet on Panghat, that well, never to separate in life. Both begin to love each other. Mohan never knew that his beloved was to be wedded to his friend Kiran.

But here Kiran was already in love with another girl Jyoti who was with him in the college. She played the heroine of the Drama. But this particular scene of the Drama when Kiran's father enquired of him the news of Shivpur proved very interesting. Kiran somehow managed to satisfy his father by irrelevant replies, as he could not see Mohan who would give him all the details of Shivpur.

Mohan's love was, however, revealed to Kiran whom, Radha sent a letter not knowing that the name and address of her lover was different, not the same as Kiran's. Kiran is, on the contrary, pleased to know this as he was saved from an entanglement. He writes to Jamnaprasad that he does not want to marry his sister Radha, while his father had already written to Jamnaprasad informing him the marriage. Kiran is in a dilemma. Jamnaprasad comes to the city to clear up the matter. He protests against this double crossing by the father and son. But he is more wild when he knows that Kiran never come to Shivpur, but his friend Mohan. Gangaprasad is very much upset when he hears that Kiran had sent Mohan Mohan. Threatened with legal action he finally confirms to Jamnaprasad Kiran's marriage to Radha.

Meanwhile Mohan makes up his mind to clear this misunderstanding to Radha and her brother so that they may no more take him as Kiran. He comes to Shivpur, but Radha declares that Kiran or no Kiran, she loves him and him only. Whatever be his name. He is rather pleased to hear this and proceeds to her house to clear up the matter further.

There he finds Tara who is not prepared to hear anything from Mohan. She still takes him as Kiran and is greatly pleased that after all that he has come again inspite of his letter not to marry Radha. He tries to explain, but in vain. Radha is pleased in her heart of heart for this sweet misunderstanding. Mohan ultimately goes.

Jamnaprasad comes with an air of a Victor. But when Tara declares her own victory of winning over the brother-in-law herself, Jamnaprasad is greatly upset. He then clears the identity of Kiran saying that one who came was an imposter. He orders Radha to refrain from loving Mohan. But Radha is adamant. His anger knows no bounds. Besides fuel is added to fire by the news that Mohan had left the message to the town saying that all the people must go to Jamnaprasad's well for water. It is their birth right. The well cannot belong to any individual, but to the people. Jamnaprasad is flared up and in mad frenzy he puts his men with lathis to stop all people taking water from his well. Mohan protests and takes up a challenge. Big struggle ensues. Radha falls in the well to sacrifice her life. But Mohan saves her. In the end Jamnaprasad's eyes are opened. He repents for his action and gives Radha's hand to Mohan. Kiran is happily wedded to Jyoti and both the couples are happy on the new 'Panghat' - a new well built by them from proceeds of their second drama 'Panghat'. 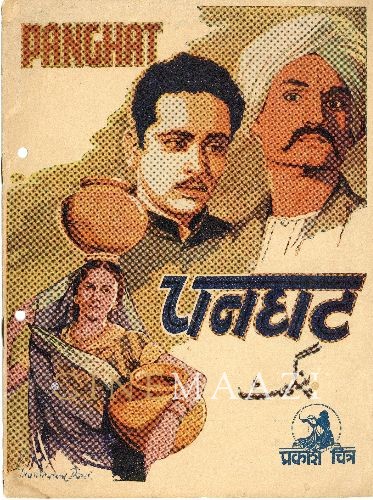 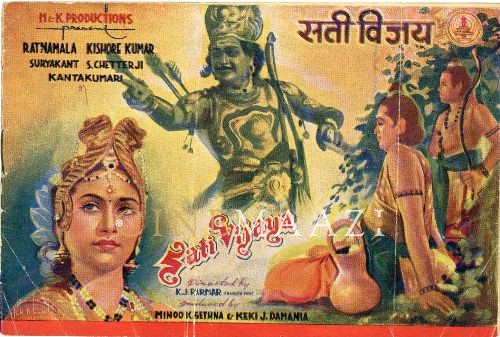