"PARTNER" is the story of Johnny and Ronnie. They are the best of friends in Delhi but their ambitions are different. Johnny wants to go to Bombay and earn a lot of quick money and Ronnie wants to stay in Delhi and become a Police Officer. The two friends are thus separated.

In Bombay, Johnny gets drawn into the underworld. He becomes a black marketeer in Tiger's gang. A new evil force enters Bombay - Panther - who has smuggled drugs worth crores of rupees into the country. Panther and Tiger join hands and spread the drug menace into every nook and corner of Bombay.

Ronnie now comes to Bombay and reunites with his old friend Johnny. Ronnie asks Johnny to get him into Tiger's gang, but Johnny refuses to let his friend get into crime.

Johnny meets Shaila, and he falls in love with her. A couple of chance meetings convince him that they are made for each other. Friendship develops into love and one night he confesses to her that he is really a black marketeer. Shaila is shocked and she asks him to give up crime immediately if they are to remain friends. Johnny realises the enormous error of his ways ad decides to live life honestly from that moment onwards.

Johnny resigns from Tiger's gang and becomes a taxi-driver.

Tiger tries to get Johnny back into his gang, but unsuccessful. So Tiger sends his men after Johnny. Tiger's men stop Johnny's taxi and bash it up completely. Johnny gets angry and thirsting for revenge he busts into Tiger's den. Johnny and Ronnie now join hands and together they break up Tiger's den and join Panther's gang.

"Partner" - a romantic thriller with all the box office ingredients that spell entertainment is presented in a fresh manner with fresh faces and fresh characters.

"Partner" - a musical thriller - is packed with super fast action, music, romance and the slickest disco picturisation of the year.

"Partner" is the story of a little film that has become big. 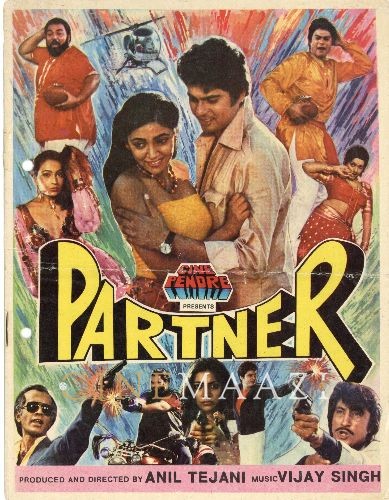