One never knows where one’s destiny takes us. Take for example, the case of Kalpana Iyer – the famous dancer in the mould of Helen and Cuckoo, who received great acclaim for her hit numbers like Koi yahan naache naache (Disco Dancer, 1982), Rambha ho Rambha (Arman, 1981) or Jab Chhaye mera jadoo (Lootmaar, 1980).

Born in a poor Tamil Brahmin family, Kalpana Iyer was ‘discovered’ on stage by a choreographer who introduced her and her parents to the legendary playback singer, Mukesh. The financial condition of her family meant that this was an opportunity for her to help with the finances and she started taking part in stage shows as a dancer, first with Mukesh and then with Kishore Kumar and Kalyanji Anandji.
After her college education, she worked for some time with the Oberoi hotel group and then with Eve’s Weekly magazine as an assistant for a photographer. It was in 1975 that she participated in a beauty contest sponsored by Femina and became the runner-up, bringing her to the notice of Vimla Patil, the then editor of Femina. Kalpana Iyer’s modelling career then began in great earnest.  Kalpana also represented India as Femina Miss India in the Miss World contest in London where she made it to the final round with very little assistance.

This achievement led to her first film, Manokaamnaa (1980) made by Rajshri films. One thing led to another and she started getting offers for dances in films, triggered by Dev Anand casting her for the Jab chaaye mera jadoo number in Lootmaar. Kalpana Iyer, the dancing queen, became an overnight sensation.  The next two decades saw Kalpana groove to some hit songs (Hari Om Hari, Koi yahan nache nache) and also make her presence felt with her acting in supporting roles. The 1990s saw her diversify her skills to television where she acted in acclaimed serials like Banegi Apni Baat (1993) and Junoon (1995).

It was in 1999 that she acted in her last movie (as of date) – Hum Saath Saath Hainmade by Rajshri Films. She then moved to Dubai. At present, she continues to live in Dubai, where she works in the hospitality industry as a hotel manager, a far cry from the peak of her brief yet successful career as a dancer and actor. 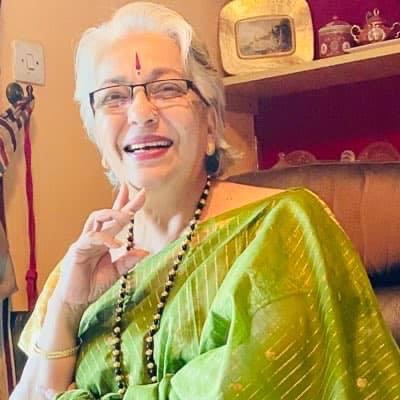