A chain is pulled. Sixty bells toll in a frenzy. Murder has been committed. The emperor appears on the balcony and hears the complaint. He has taken another man’s life. He must pay it with his own. Let him be hanged at dawn tomorrow” thus is justice delivered by the august Emperor Jehangir, whose judgement was always based on his unswerving doctrine of “Life for Life”.

Events were brewing to put this doctrine of his to a severe test. Mangalsingh was enamoured with Kunwar inspite of the ancestral enmity that existed between their families. One day after a secret romantic interlude with Kunwar, Mangalsingh is confronted by her enraged brother Ranjit challenged to a duel. In the fight that ensues Ranjit is thrown off his horse, mortally wounded. While still repenting he had killed his beloved’s own brother Mangalsingh is shocked to find himself forced to face the father of Kunwar. An inadvertent stroke from his sword lacerates the old man Udayasingh badly and Mangalsingh horrified by his heinous deeds flees to seek the comforting arms of his mother. He then relates the whole story of his misadventure to his father Sangramsingh who assures him that he would be acquitted by the Law. Just then Udayasingh staggers in the house and demands the head of Mangalsingh. Sangramsingh asks him to appeal to the Law. But Udayasingh may die before he could reach the palace and place his case before the Emperor. In that case Sangramsingh assures him that as a true Rajput he would himself offer his son to be tried by the Emperor. As if in contradiction his words the sound of vanishing hoofs is heard. Udayasingh sees Mangalsingh running away. What ignominy for a noble Rajput father to have a cowardly son! Learning that the doting mother had persuaded the son to turn a truant. Sangramsingh condemns his wife with trenchant words.

As feared. Udayasingh expires just before he could complain to the Emperor who then orders the son, Ranjit to be summoned little knowing that Ranjit too could speak no more. As a last resort Jehangir summons Kunwar in the palace and enquires about the murderer of her brother and father. But Kunwar inspite of the persuasions of Nur Jehan refuses to give out the name of Mangalsingh. Just then Sangramsingh enters and informs their Imperial Majesties that his son Mangalsingh was the person the State was looking for and that he had turned fugitive. Jehangir while appreciating the loyalty of Sangramsingh imposes upon him the task of producing his son before the law. In the end Nur Jehan entrusts Kunwar to his care and bids him to look well after the orphan as she was the charge of the State.

Mangalsingh sends message home telling that he was safe and away from danger, little knowing that his father would act on that message and comes to arrest him with the Imperial warrant.

Produced in the Durbar before his Imperial Majesty, Mangalsingh recounts the incidents faithfully. However the fact of his having led away from the Law turns against him and Jehangir retires for passing the sentence. In his private chamber he is accosted by Sangramsingh, who vigorously puts in a plea for mercy. Would Jehnagir relinquish and let mercy quash his doctrine of “Life for Life!” Not even all the loyal services of Sangramsingh and his forefathers were enough to tinge the justice of Jehangir with favouritism. Jehangir survives the grueling test and passes the sentence of death for Mangalsingh. But next day being the first day of Ramzan, the hanging is postponed till the fasting month is over. Disappointed and broken hearted Sangramsingh admits his failure to his wife who now retaliates and scoffs at his faithin the justice of Jehangir with a fire spitting tongue.

Kunwar now tries her only trump and seeks the audience of the Empress Nurjehan, She entreats her to use her influence with the Emperor and save Mangalsingh for otherwise she would have to be a Sati according to the existing custom. Finding Nur-Jehan helpless Kunwar retires saying what good is it to be an Empress if one could not save the life of a single man! These words linger in the mind of Nur-Jehan and perturbed by them, she accosts Jehangir on the errand of mercy. Jehangir assures her that if justice demanded even her head he would not shirk from the supreme sacrifice. As if the Providence accepted the challenge the sixty bells toll ominously. It is the washer-woman Rabum aooealing for justice against Nur-Jehan whose stray arrow had killed her husband, while the Empres was practicing archery from her terrace. “Life for Life” was his doctrine of Justice, will it survive this shattering ordeal? That is what Sangramsingh wanted to see. If the Empire would abandon his doctrine of “Life for Life” in the case of the Empress he had the perfect right to secure freedom for his son. The Empire is caught up in whirlwind of suspense, while the Emperor is torn between two great passions, justice and love. Nur-Jehan urges him to go ahead and dispense the justice as he had always done, for if he sacrificed his justice for her sake, the posterity would abhor her very name and that would be too great a punishment for her crime. How Jehangir the greatest lover and judge of all the Moghul Emperors steered clear of this annihilating quagmire, forms the most thrilling episode recorded in the Indian History and the most exciting climax seen on the Indian Screen. 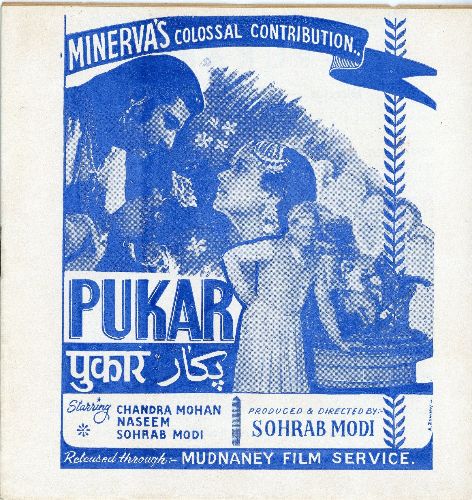 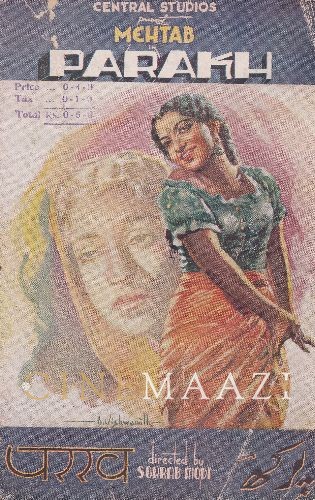