The RAJA ? of which state ?

None: He was the "RAJA" of the hearts of people-and the Raja of decoits.

Hakumatrai, The Diwan of Pratapgarh state and faithful to Queen Mother-with the company of Bankelal, the owner of Carnival, were planning to capture the state in their hands. The den under the Carnival, was the place for their vices.

Hakumat Rai, planned to administer a particular medicine to prince Deepak, mixed in ice cream, served through Mala during the party held in honour of Prince on his return after completion of his education.

This medicine would make the prince lunatic on the 7th day of its administeration-and Diwan would arrange raids by decoits on the capital in order to denounce the prince as unfortunate for the state.

On the seventh day-on the birth day of the prince, Princess Rajkumari of Amargarh, the fiance of the Prince was scheduled to attend the function. Hakumat Rai in order to create his personal impression upon the Rajkumari-arranged an attack on the princess to snatch away her "Naulakha" necklace and there-after get her back. But "Raja" averted all the plans of Diwan and there the first meeting between Raja and Princess took place.

The events started moving fast-On the birthday party-the Prince acted like a lunatic-The Queen mother became upset on the prince having gone lunatic. On the other side meetings between Raja and Princess started occuring frequently-Raja-The Raja of decoits got popular amongst people-though he was a king of decoits.

To capture Raja-Diwan kidnaped the princess and put her in the den-hoping that he will get both Raja and the princess.

How Raja get the princess released ?

See the picture "RAJA" and you will find it yourself. 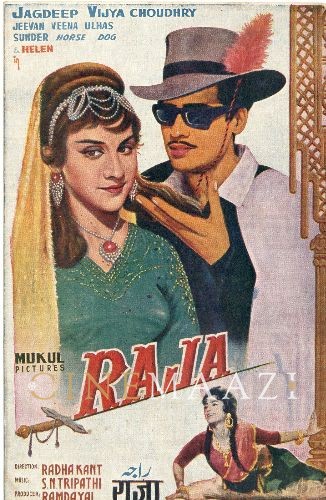