It's a love story set against the backdrop of moral decadence, social corruption and political intrigue in the over populated city of Calcutta a friendship of convenience and greed grows between industrialist Jeevanand Sahay and over ambitious politician Bhagwat Chowdhary. Jeevanand needs licence and permit to make money and Bhagwat Chowdhary needs money to attain power that produces licence. They need each other to form the vicious circle that has held millions from making progress.

Jeevanand's only son Narendra and Choudhary's only daughter Radha are class mates. Radha loves Narendra who treats her only as a friend. Narendra is a sensitive anxious young man who wants to imbibe and impart goodness. His soul is tormented with moral decadence that has spread like cancer all over the society. He cannot understand the language of money and power, therefore, communicates with only his grandmother and maternal uncle Kunj. Kunj Mausa is treated like an intruder because he has sacrificed all worldly possessions for the sake of a prostitute.

Far from this madding crowd, Narendra visits Gangotri where he meets a girl Ganga. This girl from the Himalayas symbolises purity, love and simplicity. Ganga and Narendra are soul mates. She satisfies his eternal thirst for happiness and he regains confidence in life. They get married accordingly to the customs of the hills. He returns to Calcutta with a promise to return to escort her to his family.

He is unaware of the fact that Jeevanand and Bhagwat Choudhary have decided to seal their relationship with a Radha-Narendra marriage. He reveals of his marriage with Ganga to his grandmother who, alas! dies too soon to help him. He runs to Gangotri but the all-powerful Bhagwat has his tentacles of power spread everywhere and Narendra is arrested only a few miles from his Ganga. He is forcibly brought back and imprisoned in his own house.

Ganga gives birth to a baby boy and learns through a delayed letter that Narendra is engaged to be married to Radha. Ganga decides to go to Calcutta only to handover her child to his father. Narendra manages to send Kunj to Gangotri but it's late. Her journey to Calcutta is a nightmare. Pimps, murderers and criminals try to exploit her but she retains her purity with sheer Himalayan guts. They fail to corrupt her but she reforms a pimp. Ganga reaches Calcutta.

Does she reach in time to stop Narendra's marriage with Radha ?

Do Bhagwat Choudhary and Jeevanand Sahay accept her marriage with Narendra ?

Does Kunj Mausa shame them into accepting their sinful ways ?

Do Radha and Bhagwat Choudhary reconcile to the truth ?

Do we understand and accept that pollution in thinking is worse than physical pollution ?

Rajkapoor answers all these questions and more in "Ram Teri Ganga Maili". 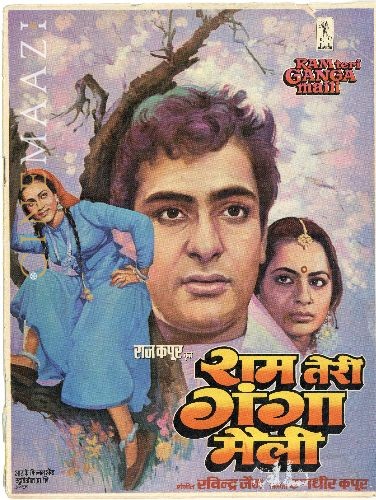