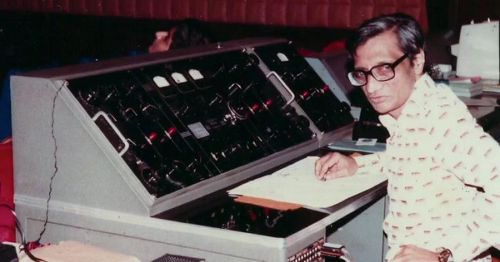 To make a mark behind the scenes, in an industry that is synonymous with what appears and is visible on the screen, is definitely an accomplishment. To be rated among the best, not just in the country, but in the world heightens this accomplishment much more.

Mangesh Desai is one such luminary who has made his name in an essential but definitely non-glamourous aspect of filmmaking – sound recording. For over 30 years, in practically each and every film, his name would invariably show up in the credits, becoming familiar to even the common audiences who equate movies with the actors!

Born in Ratnagiri in 1923, Mangesh Desai moved to Bombay in 1947 when he was left in his uncle, the music composer Vasant Desai’s care. The reason why he was left in his uncle’s care was that Mangesh had become a freedom fighter and had participated in the 1942 Quit India Movement following which he had been imprisoned till 1947. Vasant Desai took Mangesh to Rajkamal Kalamandir, and there on began Mangesh’s career – first as an apprentice (earning not even a rupee) and then as a technician who earned a mere Rs.65 per month! Since his interests lay in electrical equipment, the famous studio owner and producer V Shantaram had assigned him the job of assisting his Chief Recording Officer, Mr Parmar. It was this training and also an apprenticeship under B.M. Tata that was to result in Mangesh Desai’s honing his skills.

His first break came when J.B.H Wadia asked him to finish the recording of Madhosh (1950) as Mr Parmar was unwell. Mangesh Desai took up the opportunity and did not look back. His next film was Amar Bhoopali (1951). He soon made his mark in films such as Jhanak Jhanak Payal Baje (1955), the Marathi film, Shirdhiche Sai Baba (1955), and Toofan Aur Diya (1956).

While Desai started his career with Rajkamal Kalamandir as a sound assistant, he took charge of the sound department at the studio in 1965. He was also associated with some of the best names in the industry and worked in hundreds of films over the next three decades. Considered a pioneer and genius in the field of sound mixing/re-recording, Mangesh Desai’s contributions have been exemplary. Be it Sholay (1975), Pakeezah (1972),Yaadon Ki Baraat (1973) to just name a few, Mangesh Desai’s name is found in the credits. It is also said that he went beyond his role and would often advise directors on how to enhance the film. Desai is said to have advised Manmohan Desai to freeze the moment in Coolie when Puneet Issar’s mistimed punch landed Amitabh Bachchan in hospital. In the film version, the scene has English, Hindi and Urdu subtitles, informing the viewer about the incident. It was he who added the sound of the train whistle to the song Chalte chalte yun hi koi from Pakeezah, as well as the whistle in the iconic Mere paas maa hai scene in Deewaar (1975). He gave an extra dimension to the sounds of gunfire and the coin flip in Sholay.

Mangesh Desai’s style of working was highly appreciated and his status in the industry was such that release dates of films were planned according to his diary.

Due to complications following heart surgery, Mangesh Desai was in a coma for a few months and died on 15th October, 1985 in Bombay.