Scientist Bhushan discovers a method to conserve and use the electrical energy discharged by lightnings in the sky. Balwant, one of his colleagues, wants to steal his research papers and sell them to some aggressive nation for millions of dollars. Balwant's scheme misfires by involving Bhushan, who is somewhere abroad in an accident which makes him lose his memory. But fortunately Bhushan has entrusted the records of his discovery with a Buddhist monk in Japan and the address and details to approach the monk are very cleverly hidden unknown to anyone in the pendant, a statue and a time-piece which are distributed to three different persons in Singapore, Bankok and Honkong, with the request to hand them over to Bhushan's brother Raju on his demand.

Raju, who is an intelligence agent, sets out in search of his brother. His first contact is Lily in Singapore, who was Bhushan's secretary, during his research. With Lily's help he traces Vimla, Bhushan's fiancee, who was owning the pendant containing the secret. Balwant kidnaps Vimla but fortunately Vimla had presented the pendant to her intimate friend Ratna, who is a dancer in a night-club. Raju, after some dare-devil fights with the henchmen of Balwant, retrieves the pendant from Ratna, but in the process, he falls in love with her. The clue in the pendant reveals only half of the address and he has to meet one Mr. Robinson in Hongkong for the other half. A slip hidden inside the time-piece, handed over by Robinson, sends Raju to one Somsoi in Bankok. Raju encounters Somsoi's daughter Meeta, who falls in love with him without realising that he is already married to Ratna. The directive inside the statue of Buddha, given by Somsoi, necessitates Raju's visit to a Buddhist Temple in Kyoto where he has to fight a Japanese wrestler to take charge of the box left there by Bhushan.

Bhushan and Vimla, who are kept captives by Balwant, are released from his hold by Lily, who informs Raju also about it. Bhushan, Vimla, Raju and Ratna are to meet at the Expo in Osaka. Balwant comes to know about their plan and just a couple of moments before they meet, he kidnaps Bhushan and Vimla again with the help of his gang.

What happens to Bhushan and Vimla ? See it on the "Silver Screen." 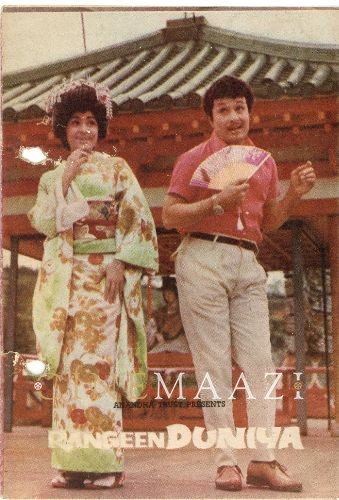