"My life is a failure Mrs. Sen ! My life was meant for failure. I couldn't do anything in my life. I cannot do anything."
"Who says you cannot Manav? You have to be as great as your great father."
This was the conversation going on between Manav and Mrs. Sen.
But who was his great father? His father Umakant was a great Jagirdar, who dreamt of the betterment of his people. On the call of the democracy of FREE INDIA he left his zamindari because he wanted to wipe out the curse of injustice done to the people by his ancestors.
His palace was mortgaged to Hiralal, and the mean-minded Hiralal snatched his palace. Jagirdar Umakant came out on the streets with his wife Sumati and his son Manav with the ideal of living like a common man.
Then he stood firm in front of the crude reality of life. He left his wife and his son with his best friend Sunder Lal, and went out in search of a job because he didn't want them to share his miseries.
Poor Sumati awaited her husband for months, but she couldn't get any news of Umakant. Then, considering about the future of Manav, she took Manav to her relative's place at Calcutta and left her address for her husband.
She couldn't get her relatives at Calcutta, but got shelter in the childless family of Anupama and Satish. A woman is always a mother, whether she has got a child or not. So, the motherhood of Anupama adopted Manav as her own son.
Sumati left Manav with Anupama and went out in search of her husband. Destiny divided them, tore them, threw them to different paths
The days became months, months became years and this way, twelve years passed and fate brought a sweet scented spring in Manav's life.
He got the love of Anupama, but his soul used to weep because he couldn't forget his lost parents.
In the midst of tears, remembrances and sorrows, Nature consoled him and the idol of consolation was Sandhya, the distant relative of Anupama. Sandhya, became the dream girl of Manav because on her face, he saw the shade of his lost mother.

It was Manav's birthday, and the grief- stricken face of his lost mother came before his eyes, Manav couldn't resist his feelings and sang out the song of his miseries. But Anupama couldn't bear it and she fainted.

Manav understood Anupama's feelings and realised his fault. He promised Anupama that no power on earth could separate them.

Sandhya silently realised the agony of Manav's heart. Her love gave a temporary solace to Manav's restless mind. And one day in a most unexpected moment, his father Umakant appeared before him. But Manav couldn't disclose his identity and says "I am your lost Manav" as he had promised Anupama "no power on earth can separate them." Manav introduced himself as Amit Roy.

Umakant had become a great industrialist and the lady, who inspired him to be a big man, was Shanti Devi Success touched his feet, but still he was craving for Sumati and Manav.

Nature had many surprises for Manay. He got the news of the existence of his long lost mother for whom Manav had craved for twelve years, but couldn't get her address. He went out in search of his Mother in Benares.

On the other hand, Anupama, who loved Manav like her own son became cruel to him. Her affection had given him a heaven, but that heaven was made of glass. So, the heaven of twelve years was broken into pieces. Sandhya's father also misunderstood Manav and Manav, the traveller of life, came out on the streets.

Why did Anupama treat Manav so harshly?

Could he get back his sweet heart Sandhya as his life partner?

Could he search out his mother?

Could he unite his parents?

The answer to all these questions of fate is the heart touching story "SAMBANDH". 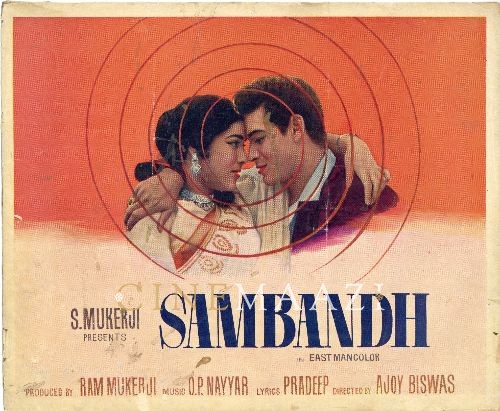