"Freedom is my birth right and I shall have it".....  and.....  "No man has ever failed until he has stopped trying."  These great Gandhian and the Bahaullah sayings, centres the theme around which, the story of 'Samundari Daku' rallies.

The Prime Minister of Pratap Gudh, with all his guiles and wiles, tried to take the throne fibril the goody goody Raja. While the young princess was away, on a hunting trip, his maliciousness opened the gates for him, to shove the poor Raja in to the jail.

Sensing his continued presence so obnoxious and so malignant for the people of the State, Ashok, son of a poor Kisan, took a vow to save the destiny of the State from the clutches of the wicked Prime Minister. But as the old proverb says : his rebellious efforts, against the powerful Prime Minister, proved to be a drop in the ocean. Just to save his heavily priced head, he took shelter in a hide-out.

The mal treatment of the Prime Minister meted out to the people of the State, and having seen that they are at the mercy of his Satinlike whims, compelled Ashok to gird up his lions again. He kidnapped the young princess from the jungle and brought her in his hide-out, to show that he was not a dacoit, but a true lover of the State, who wanted to save it from the tyranny of the Prime Minister. The cupid did his job wonderfully, when he saw the glimpses of youth, sincerity and love for the mother land in Ashok. She fell in love with him, which enabled him to strengthen his hands.

But the mighty powers of the State, at the Prime Minister's feet, scared Ashok so much that he decided to go to high seas. But, as ill—luck would have it, a duel ensued between a pirate ship and his the ultimate goal, found Ashok coming out with flying colours.

The news, that a pirate ship had attacked Ashok's -put the young princess's mind in hot waters. She was then, up on her heels to take revenge from it. Watering her ship towards the pirate—not knowing that the same belonged to Ashok and that the leader of the pirate ship had been killed by him-she readied herself to bear the brunt of it. Ashok, putting on a disguise, faced his attacker, who was fighting, which revealed the result and the real Ashok in him. The Princess's joy knew no bounds. Hand in hand, they planned against the Prime Minister. The roughest and toughest encounter with Ashok, put an end to the Prime Minister's life. Ashok released the Raja who rewarded him with the Prime Ministership and the Princess's hand in marriage. 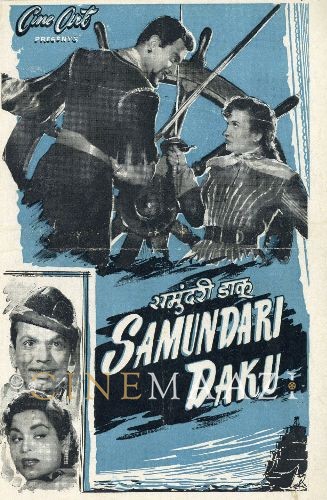