A three-time National Award winner, yet the immensely gifted music composer Jaidev remained largely under-rated in the film industry. Winning the National Award for Best Music Direction for Reshma Aur Shera (1971), Gaman (1977) and Ankahee (1985), he was famed for his compositions in films such as Hum Dono (1961), Prem Parbat (1973), and Gharaonda (1977). He had the ability to mix traditional and folk music into Hindi film situations. Debuting as a full-fledged music director with Chetan Anand's Joru Ka Bhai (1955), followed by Anjali (1957), both of which became popular, Jaidev became a known name with Hum Dono (1961) for which he scored evergreen melodies such as Allah tero naam, Abhi na jao chhodkar, and Main zindagi ka saath. Jaidev is also remembered for his ghazals and songs in Muzaffar Ali’s Gaman. Known for his non-film album of the couplets of Hindi poet Harivansh Rai Bachchan's classic work Madhushala, Jaidev’s last work was for the TV series Ramayan.

Born Jaidev Verma on 3 August, 1918 in East Africa, where his father worked as a railway official, the family moved to Ludhiana in 1927. Learning vocal music, young Jaidev’s fascination with the movies started after watching an Ali Baba film at a theatre in Lahore in 1932. He made his way to the film hub, Bombay where he managed to land a bit role in JBH Wadia’s mythological drama Vaman Avatar (1934). A few more films followed, post which he returned to Ludhiana to continue with his musical training, also taking up a job as a music teacher in a school. Post his father’s demise, Jaidev moved to Almora to attempt to train under the renowned Allauddin Khan, who was teaching then at Uday Shankar’s India Cultural Centre. Later, he was taken under the wing of Allauddin Khan’s son, Ali Akbar Khan, a sarod player working with All India Radio, Lucknow. Jaidev assisted Ali Akbar Khan who was tasked with composing music by Chetan Anand for the family banner Navketan’s Aandhiyan (1952) and Humsafar (1953) which starred Dev Anand. However, with both films failing at the box office, Ali Akbar Khan left while Jaidev stayed back in Bombay and found work as an assistant to S D Burman.

His break as music director came courtesy Chetan Anand, who offered him the opportunity to score the music for Joru Ka Bhai (1956). While the film itself was not a hit, the music stood out, in particular the song Subah ka intezaar. Jaidev next composed some fine music for Samundari Daku (1956) and Chetan Anand’s Anjali (1957). However, it was his brilliant and touching work in Hum Dono (1961) that came in for huge acclaim. He followed it up with Mujhe Jeene Do (1963), which told the doomed love story of a dacoit and a courtesan.
Despite entering the big league with these two brilliant films, the road ahead proved to be anything but smooth for Jaidev. The production house Navketan opted for SD Burman for their next film Guide (1965), while Jaidev also had a falling out with lyricist Sahir Ludhianvi during the making of Mujhe Jeene Do, which could never be repaired.

Jaidev went on to create a brilliant music score for Sunil Dutt’s Reshma Aur Shera (1971), winning a National Award for his work. He also composed for K A Abbas’s Do Boond Paani (1971), on the theme of water scarcity, creating the unsung gem, Jaa ri pawaniya. He went on to work on relatively low budget films such as K A Abbas’s Faslah (1974) and Prem Parbat (1973). However, in the years between 1977 and 1979, Jaidev produced some of his most memorable compositions in films like Alaap (1977), Gharaonda (1977), Tumhare Liye (1978), and Muzaffar Ali’s Gaman (1978), for which Jaidev won his second National Award for Best Music Director. The songs of Gaman, which revolved around the life of a migrant taxi driver in Bombay, included Seene mein jalan, Ajeeb saneha and Aapki yaad aati rahi. However, due to unknown reasons, Jaidev lost out to Khayyam for Muzaffar Ali’s next project, on courtesan Umrao Jaan Ada. A spate of smaller films followed, notable among which was Amol Palekar’s Ankahee (2006) and which won Jaidev his third National Award. He also introduced new singers like Suresh Wadkar, A Hariharan and his protegee Chhaya Ganguly in Gaman.

One of the favourite composers of Lata Mangeshkar, besides Salil Chowdhury and Madan Mohan, Jaidev also composed music for the Nepali film Maitighar (1966). He also known for his non-film album of the couplets of Hindi poet Harivansh Rai Bachchan's Madhushala, rendered by singer Manna Dey. The Madhya Pradesh government had conferred upon the composer the prestigious Lata Mangeshkar Puraskar. 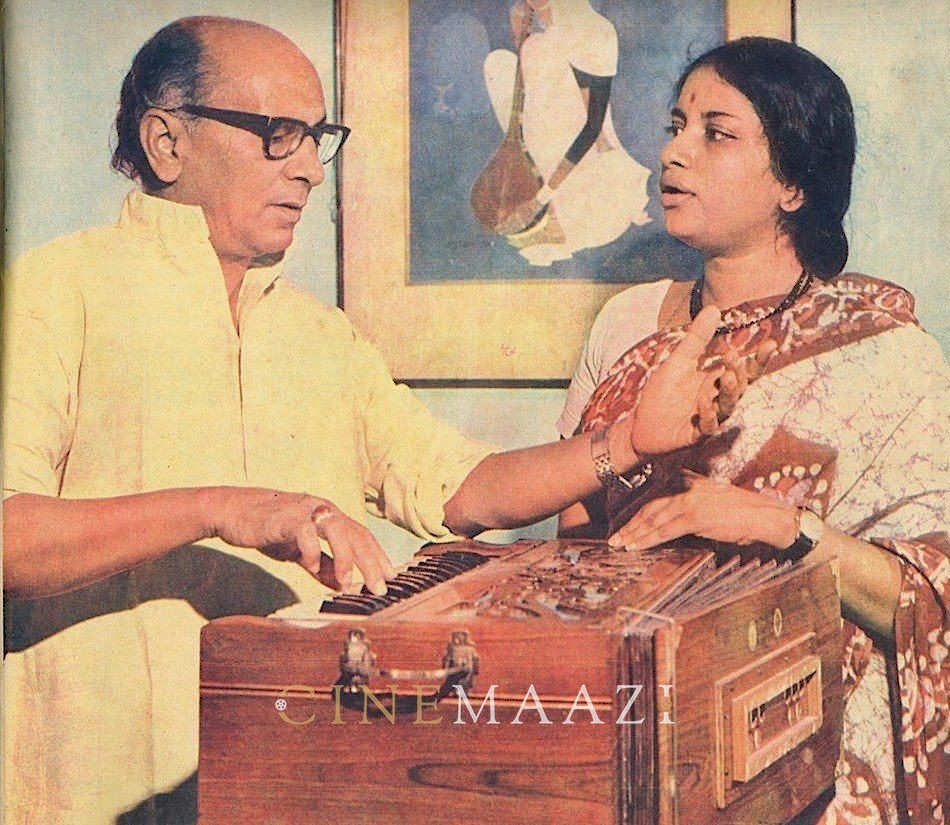