SHYAM and LALI play-mates from childhood grew young together. Their parents were intimate friends. They all lived in a village. Shyam had queer urge awakened on hearing the whistle of an engine to go to city and thus always ran towards the railway station to reach the train, but, all along Lali refrained him from fulfilling his such urge. In their YOUTHS Lali reigned the heart of Shyam and his urge for city vanished. Their parents made Shyam and Lali united through a happy marriage.

Lali gave birth to a son. Shyam was happy and joyful. Here DESTINY switched the things the other way. Immediately after the birth of a son Shyam was conveyed the news of Lali's death. This tore him in pieces. His all dreams scattered away. The attraction to stick to village melted away. The gloom threw Shyam in trance. He heard the whistle of the engine and quietly ran towards the station quitting the village for good.

When Shyam's father returned home with the doctor he found the people crying on the death of Lali. Doctor reached Lali, felt her pulse. He announced that Lali is not dead but has become unconscious due to weakness. He administrated an injection and Lali regained consciousness. But, Shyam was gone and gone for good.

Lali like a devoted Hindu wife lived on the hope that Shyam shall return to her. She kept on nursing the child in the memories of her husband.

Shyam reached city in penniless, aimless and withered state. He in queer circumstances met with a millionaire Seth Girdharilal who having had been favoured by Shyam wanted to fully compensate him. He employed him in his factory. Gave him education and position. Within few years Shyam turned into an educated and poshed Manager of the same Factory. Shyam and Roopa the daughter of Seth Girdharilal fell for each other. Seth Girdharilal announced their betrothal.

Six years had lapsed. Munna had grown a fine smart boy. He had been hearing from his mother and grand-mother that his father was carried away to city by this railway train.

He conceived the identity of his father from the description his grand-mother use to make of his father in admiring him. One fine day Munna also left the village by the same train to search his father in the city. He also under the queer circumstances reached the house of Shyam who liked him & made him stay with him. Both Munna and Shyam lived together without knowing the relationship between themselves.

Munna's disappearance made Lali miserable. Her father-in-law suggested to Lali's father to take Lali to city in search for Munna and Shyam. Lali came across Mnnna who took her to Shyam's bungalow. Shyam was to be visited by Lali when suddenly the danger alarm sounded and it was revealed that the factory is ablaze. Shyam rushed to the factory. There he learnt that Seth Girdharilal is engulfed in the fire. He rushed inside. Seth came out but Shyam was trapped in. He was seriously injured and his face was plastered.

Shyam and Roopas' marriage day approached. How marriage remained incomplete, how Lali was captured back by Shyam, how Munna, Shyam and Lali united this all you see on the screen and watch the prominent role of DESTINY in the life of every individual. 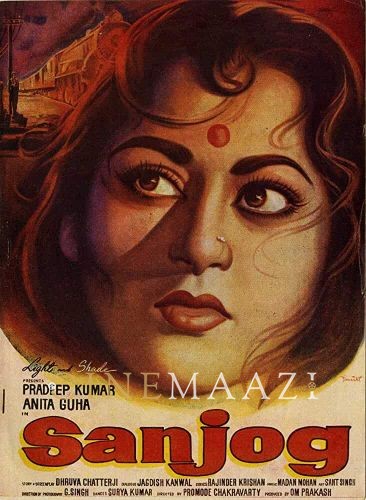