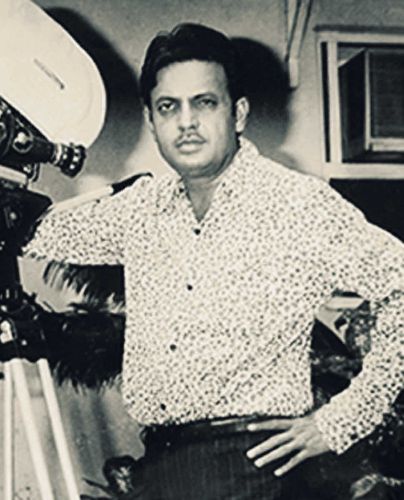 Remembered for directing several well-appreciated films across genres, Pramod Chakravarty is a producer and director, with no less than 16 directorial hits to his credit. Whether Ziddi (1964), Love in Tokyo (1966), Tumse Achcha Kaun Hai (1969) in the romantic genre; or suspense and thriller films like 12 O’Clock (1958), and Passport (1961); or then actioners such as Jugnu (1973), Jagir (1984) and Shatru (1986), he crafted successful films across the board. He founded Pramod Films in 1962, one of the most successful Hindi film production houses in the 60s and 70s. Known for producing commercially successful blockbuster cinema with substance, it unfortunately went into a decline thereafter.

Born on 15 August, 1929 in Dhaka, British India, Chakkida, as he was popularly known, ran away from home at the age of 17. He arrived in Bombay armed with a dream of making films. Struggling to find a foothold in the industry, he faced considerable hardship, living on the streets and taking up odd jobs to sustain himself. He eventually got a break, assisting Raj Khosla on Milap (1955) and C.I.D. (1956). Two years later, he made his directorial debut with 12 O’Clock (1958). A thriller combining elements of drama and mystery, the film starred Guru Dutt and Waheeda Rehman. It told the tale of a lawyer who races against time to discover the truth behind the murder of a woman, a crime for which his beloved has been charged.

In 1964, Chakravarty launched his own banner, Pramod Films, producing Ziddi (1964), a breezy entertainer which depicted the romance between vagabond poet and a rich brat, played by Joy Mukherjee and Asha Parekh. Typical 60s fare, the film met with instant success. Chakravarty repeated the cast in Love in Tokyo (1966), which was written by Sachin Bhowmick and shot extensively in Japan. Chakravarty became one of the first Indian filmmakers to use a sweeping aerial shot from a helicopter in the film. He also made Tumse Achcha Kaun Hai (1969) starring Shammi Kapoor and Babita along with an ensemble cast including Mehmood and Lalita Pawar in a double role.

The 70s saw Chakravarty make a series of films with Dharmendra, including the very successful Naya Zamana (1971) telling the story of a young writer’s work being hijacked by a villainous character. Chakravarty’s Jugnu (1973), revolving around a good-natured thief played by Dharmendra, trying to woo Hema Malini proved to be an even bigger hit. His Dream Girl (1977), featuring Hema Malini was also a success. .

Chakravarty enjoyed a high success rate with most of his directorial ventures proving to be hits, though there were exceptions such as Gangu (1962), Deedar, and Barood (1998) which sank at the box office. He worked with leading stars such as Amitabh Bachchan in Nastik (1983), and Jeetendra in Jyoti (1981). He successfully directed top stars such as Rajesh Khanna and Parveen Babi in the shelved Chamatkar; Rajesh Khanna and Shabana Azmi in the Indo-Bangladesh project Shatru (1986); Dharmendra and Hema Malini  in Jugnu, Naya Zamana (1971), Dream Girl (1977) and Azaad (1978); and Dev Anand and Zeenat Aman in Warrant (1975). He regularly worked with Pran in his films, and is also credited with being the first to sign on Akshay Kumar as lead hero for Deedar (1992), snapping him up for a three-film deal before the actor could leave to pursue modelling.

His last film was Barood (1998), an Akshay Kumar-Raveena Tandon starrer.

Pramod Chakravarty passed away on 12 December, 2004 in Bombay.