Towards the end of the last century, Saraswati-chandra was born in a rich family. He lost his mother in childhood and his step-mother was always envious of him. From the early childhood he decided to dedicate his life for "Lok-Kalyan". Realising the situation, his father got him betrothed to Kumud, the elder daughter of the Dewan of the neighbouring state. Though Saraswatichandra agreed to the betrothal in deference to the wishes of his father, he wrote a letter to the Dewan explaining his mission of Lok-Kalyan.

Kumud duly learns about the aims of her would-be husband and writes to him a letter. Soon both exchange letters and Saraswatichandra, enchanted by Kumud's letters, visits her house. Here he develops real love for her and spends lot of money buying jewellery and ornaments for Kumud.

Saraswatichandra, sensitive and tender, makes up his mind not to get married and bring Kumud in such a hostile house. In an impulsive mood, he writes a letter to the Dewan and Kumud that they may marry off Kumud to a better choice. But on realising his mistake he decides to go to Kumud personally to explain the real situation. Unfortunately the ship is caught in a storm and he reaches Kumud's house to see his beloved married to somebody else.

Broken-hearted Saraswatichandra wanders around. As luck would have it, he lands again in the city of Kumud's in-laws and finds her unhappy with a rake of a husband who not only neglects her but has secret affairs with the maid servant of the house. It is a trying period for Kumud and Saraswatichandra, who, though love each other, cannot come together. The situation becomes unbearable to Kumud and she, to maintain her loyalty to her sacred marriage, asks Saraswati-chandra to leave.

Through the machination of the maid servant, Kumud is also forced to leave the house. Disgusted with her fate, she tries to commit suicide but is saved by Sadhvis of an Ashram where Saraswatichandra has already taken refuge. Thus the fate again brings them together. Soon news comes that Kumud's husband has expired. Kumud is now free from her bond of marriage. Saraswatichandra has suffered much and now has a ray of hope of re-union. 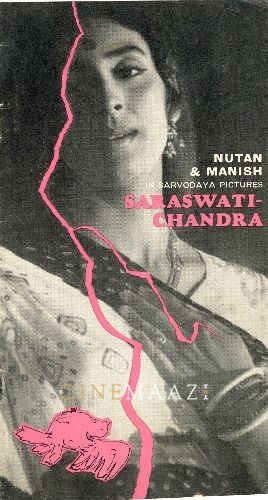