SETH Roopchand, owner of the city's big theatre had arranged a musical concert in honour of Kumar, who had recently returned from a tour abroad with his own party of musicians. In this concert, the children of the late Pandit Gyan Shankar gave much cause of annoyance to Roopchand by refusing to entertain the audience any further after having challenged the crude and orthodox music of Kumar's artistes. However, Kumar took an opportunity of making an offer to the Pandit's children to join his troupe, but Asavari, the eldest daughter, politely refused the offer.

Roopchand, led by a feeling of revenge, threatened the Pandit's children with the auction of their house, already mortgaged by the late Pandit to himself. To save the children from the impending calamity, the late Pandit's younger brother, who was looking after the orphaned children requested Babulal, Secretary of the local Matrimonial Bureau, to find out a suitable match for the eldest daughter, Asavari, so that the family may find a supporter.

And when Vinod, son of Seth Roopchand - freshly returned from England - accidentally arrived at the Pandit's house, he was mistaken for the prospective bridegroom and treated as such. The misunderstanding did not last long, though Vinod had to conceal his identity for other reasons. This chance meeting, however, marked the beginning of a fond friendship between Bhairavi and Vinod.

Later on, when Seth Roopchand actually put his threat in action to auction the house, it was Vinod who saved the situation by putting in Bhairavi's hands the ten thousand rupees he had acquired from his father's safe, without the latter's knowledge. When this was discovered in due time, the pandit's poor children had no alternative left but to quit the town to seek a living elsewhere.

When they actually left, Vinod also accompanied them by the same train. So did Munne, Babulal's nephew, who had a soft corner for the Pandit's other daughter Bageshwari. They all got down at a midway town where Kumar had already arrived with his troupe and Seth Roopchand had also arrived to have a look at the daughter of Raja Saheb, a wealthy landlord of the place, with a view to fixing up Vinod's betrothal with her.

Unexpected developments took place there and the Pandit's children accepted the helping hand again offered by Kumar and joined his party of musicians. They prospered with Kumar who got them back their old house in their home town. Of course, Kumar was already infatuated with the charms of Bhairavi and desired to make her his partner in life.

At Seth Roopchand's theatre a performance of magical tricks was held by Shyam Ruhani, an England returned magician and a friend of Vinod. The artistes of Kumar's troupe had also lent their support to the performance. At the end of the show, during a magic trick, the theatre caught fire, and while Vinod and Kumar both rushed into the flames to save Bhairavi, Vinod got himself injured and Kumar succeeded in drawing Bhairavi safe out of danger. He thus expected to gain Bhairavi's affections all the more.

Kumar then arranged a professional tour of Africa and Egypt with his troupe. He had already brought with himself from a previous African tour, a native girl of that land and promised to marry her but that promise he had not fulfilled. On this tour Kumar was accompanied by Seth Roopchand, the Raja Saheb and his daughter, Ruhani and Munne. Only Vinod was not there and that caused great disappointment to Bhairavi who missed him very much.

But her surprise was a happy one when she later on found out Vinod on board the ship disguised as a sailor. Equally great was Kumar's jealousy, and he managed to get rid of his rival by having him thrown overboard.

The entire party, after giving performances in Egypt, left for Mombasa but a heavy storm overtook their ship on the way and destroyed it completely. All the members of the party, however, luckily reached some unknown shores of that strange land somehow or other and fell prisoners in the hands of the African Chief of the region who threatened to kill them unless they agreed to give Bhairavi in marriage to him.

Did Bhairavi marry the African Chief? What happened to Vinod? Did he survive the attempt for his murder by Kumar? Did he ever meet Bhairavi again?

Let the beautiful and thrilling climax on the screen reply to all the questions. 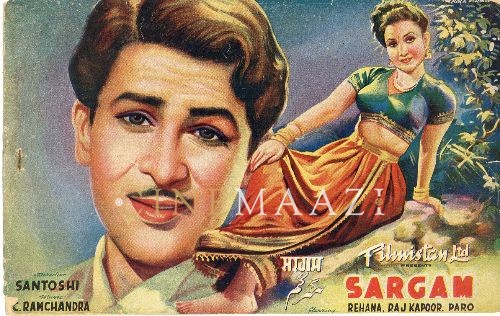