In an industry that was to become famous (some would say notorious) for its thrusting dance moves, actress Rehana is regarded as the first ‘Jhatka Queen’ of the film screen. A rage during the more puritanical 1940s and 1950s, her dances may not have won the appreciation of the educated classes but they were lapped up by the masses. Her risqué act with Nigar Sultana in Sunehre Din (1949), and her bathing scene in Dilruba (1950) raised eyebrows and set tongues wagging. However, Rehana did not seem to be overly perturbed. In fact, she is reported to have once declared, “Am I sexy? Good, I like that!’ Graduating from dancing roles and supporting roles, she went on to feature as a leading lady. Films she starred in include Hum Ek Hai (1946), Shehnai (1947), Sajan (1947), Sunehre Din (1949), Sargam (1950), Dilruba (1950), Nirdosh (1950), Surajmukhi (1950), Ada (1951) and Sagai (1951). Later, when her career went into a decline, she played second lead in films such as Dhola Maru (1956) and Delhi Durbar (1956). Migrating to Pakistan with the hope of reviving her career, unfortunately her films there such as Shalimar (1956), Wehshi (1956) and Apna Paraya (1959) failed. Raat Ke Rahi (1960) was her only hit as a leading lady, followed by the well-received musical Aulad (1962) in which Rehana did not play the leading lady.

Rehana was born Mushtar Jahan in 1931 in Lucknow. According to some sources, her real name was Rehana Anjuman Chowdhury. The daughter of a manufacturer of Moradabadi silverware who owned a factory in Lucknow, she was but a child when she began her career dancing on stage. Rehana was trained in Kathak by maestro Shambhu Maharaj himself, from the age of five. During a performance at the residence of well-known singer-actress Kajjanbai, Rehana impressed and was thereafter absorbed as a part of Kajjanbai’s theatrical company. Travelling across India as well as abroad as a member of the troupe, Rehana went on to join ENSA (Entertainments National Service Association), which had been established by Basil Dean and Leslie Henson to provide entertainment for British armed forces personnel during World War II.

She got a break in films after she was spotted dancing at a party that was attended by many folk from the film industry. She began her career onscreen with dancing parts and small supporting roles in films such as the K L Saigal-Suraiya starrer Tadbir (1945). Her break as a leading lady came with the Prabhat drama, Hum Ek Hai (1946). The star cast of the film included Dev Anand, Kamala Kotnis and Rehman. The film sparked what was to become a successful and long-standing partnership between Rehana and the debutant director of the film, P L Santoshi. Together, they went on to become part of a collaboration that would last till 1952. They worked together in films such as Shehnai (1947), Khidki (1948), Sargam (1950), Chham Chhama Chham (1952) and Shin Shinaki Boobla Boo (1952).

It was Filmistan Studios’ Shehnai and Sajan (1947) which established Rehana’s standing in the industry. Shehnai, directed by P L Santoshi, starred Kishore Kumar, Indumati, Radhakrishan, V.H. Desai and Rehana who was paired opposite Nasir Khan. It was the fifth highest-grossing Indian film of 1947. The hit song, Aana meri jaan meri jaan Sunday ke Sunday, scored by C Ramchandra, was also part of the film. Sajan saw Rehana paired with Ashok Kumar. The film was a big commercial success, and made Rehana an overnight success.

It has to be said that most of Rehana’s roles called less for acting prowess and instead capitalised on her dancing talent. She was particularly known for her dance moves which perfectly matched the peppy tunes of C Ramchandra.

After enjoying this bout of success, her career was hit by a slew of flops. From Rangeeli (1952), and Chham Chhama Chham (1952), to Hazar Raaten (1953) and Samrat(1954), all these films proved duds at the box office. Critics soundly decimated her films, with one even going so far as to write of Rangeeli, that in India when a director found it difficult to make a film with some intelligence, he made a movie with Rehana. According to such critics, Rehana had become a substitute for intelligence in the Indian film industry.

With solo lead heroine roles vanishing, Rehana was relegated to essaying the second lead in films such as Dhola Maru (1956), and Delhi Durbar (1956). Her Shin Shinaki Boobla Boo (1952) which had originally received a Universal certificate, went on to be banned by the Ministry of Information and Broadcasting for its ‘low moral tone’. Though the ban was later lifted, the film failed at the box office. Her career had gone into a decline.

Hoping to infuse a new breath of life into her career, Rehana went on to migrate to Pakistan. Her last release in India, Mehfil (1957) hit the screens after she had left the country. In Pakistan, she went on to star in films such as Shalimar (1956) opposite Sudhir, Wehshi (1956) and Apna Paraya (1959). However, they all failed at the box office. Her only hit as a leading lady was Raat Ke Rahi (1960). She had another hit in Aulad (1962) in which she did not play the lead heroine of the film. Another film she acted in, Aankh Aur Khoon was never released. Among her last appearances on screen, was a cameo dance number in Dil Ne Tujhe Maan Liya (1963).

Rehana was married to Iqbal Shehzad, producer of Raat Ke Rahi. The marriage did not last. She went on to marry businessman Sabir Ahmed. After her husband’s death, she lived a reclusive life. In 1995, she was a member of Pakistan’s Nigar Awards jury. She is said to have spent her later years teaching children the holy Quran. In 2010, her family filed a case against the makers of Once Upon A Time in Mumbaai (2010) for apparently using her name in the film without her consent and maligning her image. 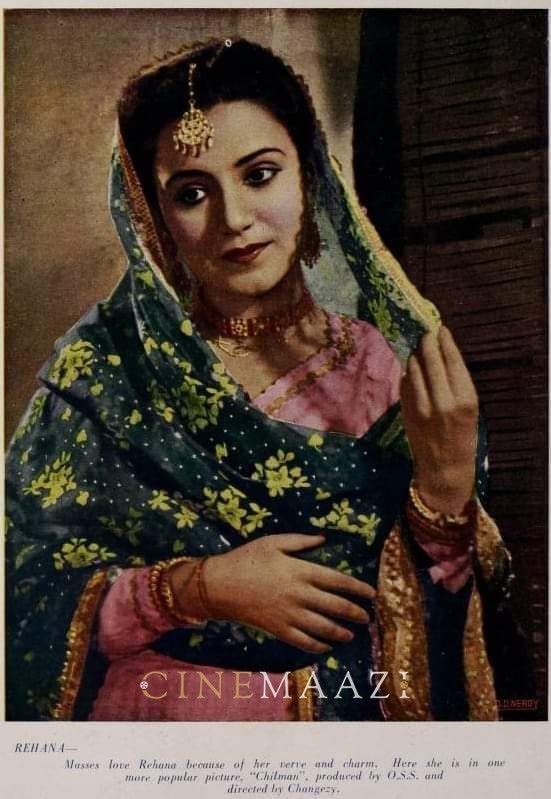