Sethu (Vikram), the rough and macho president of the college union, uses violence as his tool to deal with wrongdoers. He lives with his brother Vasudevan (Sivakumar), a judge, and his sister-in-law, who is the only person who seems to understand him properly. Sethu's close friends Das (Sriman), Shriram (Shriram), and Raju at college are of great support to him. Sethu, who is called Chiyan in college, comes across a timid girl Abithakuchalambal or Abitha (Abitha), daughter of a poor temple priest, who joins the college as a first-year student. Abitha is already engaged to her relative Ambi (Mohan Vaidya) and she comes to the college with Ambi's encouragement. Sethu and Abitha keep bumping into each other and her soft disposition and innocence attracts Sethu. He starts wooing her and seeks her acceptance. Abitha is not able to understand his aggressive behaviour and forced affection for her; she respects him only as her senior in college. Sethu is disappointed with Abitha's lack of acceptance and gets disturbed. He longs for her; the pain of not getting her love affects him.

Abitha's sister (Lavanya), married to a Government employee for five years, is sent back by her husband to her father demanding more dowry. As her father is unable to organize the money, she becomes desperate to get back to her house to be with her just-born baby. Hence, she keeps asking everyone for help but no one is willing to give her the money she needs. Finally, she lands up in a brothel in that locality without knowing the happenings there, and the owner promises to give her money. When Sethu and his friends raid that house with the police, Sethu spots this innocent woman there. He helps her to escape without anyone noticing her. After understanding her predicament, he beats her husband at his office and orders him to take back his wife. Ambi, who has been witnessing these happenings, develops a positive opinion about Sethu and reveals these to Abitha, saying that Sethu is more suitable than him.

When Abitha finally starts liking Sethu, his world changes overnight to joy. The joy suddenly vanishes when the brothel owner (who was attacked by Sethu with the police) comes back with his men and attacks Sethu when he is alone, enjoying Abitha's acceptance of his love. Badly beaten, his head is banged against a stone. He loses his mental balance and becomes a chronic mental patient. He is unable to comprehend anything and is admitted to a mental hospital. The doctor advises his brother to try alternative medical treatment so that he can recover faster. Vasudevan admits him in Pandi Madam, an Ayurvedic treatment centre run by a yogi, and Sethu gets treated there. The treatment works and Sethu slowly recovers. Meanwhile, Abitha is totally disturbed about losing her lover and seeks help from Ambi to come and see Sethu. Before she reaches Pandi Madam, Sethu regains his memory but is unable to convey this to anyone as he is isolated there for the treatment for a period of 40 days.

He tries to escape from the asylum but fails and is injured badly in the process. When he is fast asleep, Abitha comes to see him, gets devastated seeing his condition, and returns without speaking to him. In the meanwhile, Abitha's father, who comes to know about the love between her and Sethu, pleads with Vasudevan to help him so that she can be married to Ambi. Vasudevan, upset with his brother's condition, advises Abitha to accept reality and follow her father's instructions. Her engagement is fixed for the next day. Sethu manages to escape from the asylum and comes to meet Abitha. However, by the time he reaches there, Abitha commits suicide, unable to forget her lover and not willing to marry anyone else. When he arrives at her residence, he is welcomed by the sight of her dead body and realizes that she had killed herself. Distraught with this sight, he walks out and behaves like a mentally disturbed person with everyone, including his friends and brother's family, and walks into the asylum van, which has come to pick him. He leaves everyone as he doesn't want to have ties with anyone, after the death of his true love. 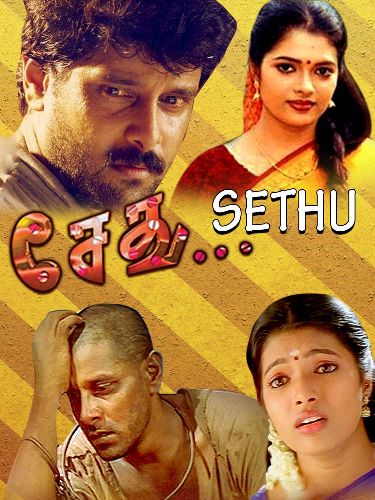