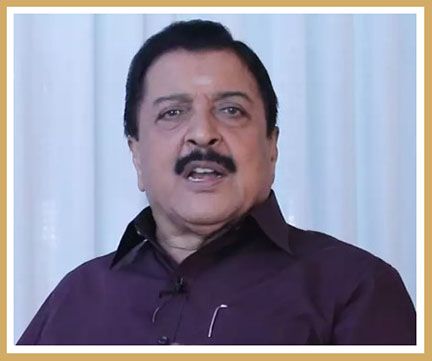 One of the great actors of Indian cinema, Sivakumar is known for his wide-ranging scope of roles in leading as well as supporting parts in Tamil cinema, as well as television. He is reportedly known as the Markandeyan of Tamil cinema. Making his acting debut in A C Trilogchander’s Kakkum Karangal (1965), he went on to act in more than 190 films. Some of his popular films include Pattitkatu Raja (1975), Rosaappo Ravikkai Kaari (1979), Avan Aval Adhu (1980), Vandichakkaram (1980), Agni Sakshi (1982), and Sindhu Bhairavi (1985). Felicitated for his work on numerous occasions, he won the Filmfare Award for Best Actor – Tamil for the films Rosappu Ravikkai Kaari and Vandichakkaram (1980) as well as the Lifetime Achievement Award – South (2007). He was bestowed the Tamil Nadu State Film Awards for his performances in the films Avan Aval Adhu and Agni Sakshi. In 2012, he was honoured with the Jaya TV Lifetime Achievement Award. He is also known for his visual artistic works, as well as his religious discourses. He is the father of leading actors Suriya and Karthi.

The following year, he featured as Bhagwan Vishnu in the A P Nagarajan directorial Saraswathi Sabatham (1966), which starred Shivaji Ganesan, Gemini Ganesan and Savitri. A mythological, it was based on the episode of Sage Naradha creating a dispute between three goddesses Saraswathi, Parvathi and Lakshmi, about who is the most powerful of them.

He acted in several notable films over the decades including Kandhan Karunai (1967), Thirumal Perumai (1968) and Uyarndha Manithan (1968). In the action drama Pattikatu Raja (1975), he led the cast comprising Kamal Haasan and Jayasudha. The film reportedly ran for 105 days at Capital theatre in Colombo, Sri Lanka.

The Mohan-directed Rosaappo Ravikkai Kaari, saw him star in the drama film which told the story of Sempatta, an illiterate, innocent man who is married to Nandhini. His mother dislikes Nandhini’s lifestyle and he decides to move out with Nandhini. However, later, Nandhini gets attracted to Manickam, a suave man.

Avan Aval Adhu saw him star in the Muktha Srinivasan-directed film dealing with the then-ground-breaking issue of surrogate pregnancy. He played a character called Ramu, whose wife tries to conceal the surrogate mother of their child, who is a prostitute, from her husband. But the surrogate mother and Ramu get acquainted accidentally and their interaction grows without the wife's knowledge. Eventually, the strict and possessive wife gets the child she had always longed for, only to lose her husband's undivided love and attention.

Agni Sakshi, directed by K Balachander, saw him play a loving husband trying to save his wife from the imaginary cage she has locked herself up in. He made waves again in K Balachander’s Sindhu Bhairavi (1985), which told the tale of a Carnatic singer who, at the peak of his career, loses his credibility as he gets addicted to alcohol due to the loss of an intimate companion.

One of his biggest hits was Vandichakkaram, directed by K Vijayan, which revolves around a ruffian who, after falling in love, resolves to mend his ways.

His most recent film appearance was in Kootathil Oruthan (2017). He made a special appearance in this T J Gnanavel-directed comedy which revolved around Arvind, an ordinary Joe who is not noticed by any, be it at home, school or among friends, and falls in love with Janani, a class topper and an all-rounder who excels in sports and extra-curricular activities.

He also acted in popular TV serials like Chithi, Annamalai, and Nandhini.

In recent times, he ventured into public speaking, delivering talks on various subjects, including Hindu theology. In 2015, he accomplished a phenomenal feat of narrating the epic, the Mahabharata in two hours and 15 minutes at a private college in Erode. Having already done the same with the Ramayana, it took almost two years of meticulous preparation for him to concise the major highlights of the epic saga, the Mahabharata.

Married to Lakshmi Kumari, his sons Suriya and Karthi are actors, while daughter Brindha is a playback singer.