"SHAHEED" is the story of the sacrifice of those countless young patriots, who, unknown and unsung, laid down their lives at the altar of the country's freedom from foreign domination.

Ram was one such martyr. Son of RaiBahadurDwarka Dass, a District Magistrate, Ram imbibed the spirit of the preachings of Mahatma Gandhi at a tender age, and one day while his father was busy dispersing a procession, Ram was talking to his mother of his dreams of becoming a great national leader like Jawahar Lal Nehru.

Ram was greatly influenced by his friend Gopal, son of the local landlord HakumatRai, of Amritsar. He was friendly also with Sheela, Gopal's sister. Vinod, son of the Superintendent of Police also tried to be friendly with Sheela, but Sheela had no regard for him, a "toadibacha'.

Years roll on and the children grow into youths. In the "Quit India" Movement of 1942, Ram is seen as an underground Socialist revolutionary, while Sheela is a lady doctor and Vinod an Assistant Superintendent of Police Ambala.

Ram loots a railway train carrying Government money and is wounded in this act, and Sheela, who is accidently travelling with her father by the same train sees it, without however, recognising the victim.

In AmbalaSheela's father meets the Superintendent of Police and negotiates Sheela's betrothal with Vinod. Next day while calling on their old friend,

RaiBahadurDwarka Dass, Sheela recognises Ram as the revolutionary, removes the bullet from his arm and nurses him. The RaiBahadur, obviously, would not have anything to do with a revolutionary son. Ram is turned out of home. He goes to meet Sheela where he learns from Vinod's father about the negotiations of her betrothal to Vinod being completed. Ram leaves Sheela's house in despair and Sheela follows him. They spend a night at a hotel where they take vows of loving each other till death parts them.

Gopal, Sheela's brother and a follower of Gandhiji, gets arrested on a concocted charge of blowing up a railway bridge, Vinod, the Police officer threatens to have him severely punished unless Sheela agrees to marry him. And Sheela is reluctantly made to agree, with a determination never to consummate the marriage. This obtains Gopal's release. Ram carries on his underground activities, where he gets the news of Sheela's marriage with Vinod.

Vinod tries to have his marriage consummated by all means fair or foul. Entering Sheela's room by a window one day he forcibly embraces her. She struggles and succeeds in getting out of his clutches, but before that, Ram has seen her in Vinod's arms for a short while, without her knowing it.

Ram's dreams are shattered and he hurries back from Vinod's house where he had gone to ascertain the truth and was rudely shocked by the above misunderstanding. In the hurry he drops an envelope containing information about his activities and whereabouts. This gives a clue to Vinod, who raids the hiding place of Ram. Ram and his colleagues escape, but Gopal and 'Guruji', the leader of the movement are arrested.

Ram, entrusted with the task of securing Gopal's and Guruji's release, pleads in vain with his father. Meanwhile, harassed constantly by Vinod, Sheela becomes a victim of tuberculosis.

Persuaded by Ram, Sheela goes to a hill station, but her condition worsens and with Ram's careful and constant nursing when she shows signs of improvement, Ram is arrested by Vinod.

This time, the news of Ram's arrest has a healthy effect on the RaiBahadur's mind, who resigns his service and renounces his title and defends Ram at a special tribunal where he is being tried as a revolutionary. He, however, fails to save his son, who is sentenced to be hanged.

As the procession of the great martyr Ram passes beneath the balcony of her house, she pays her last tribute to him by means of a flower garland and the next moment Vinod finds her lying lifeless with her head resting on the balcony window sill. 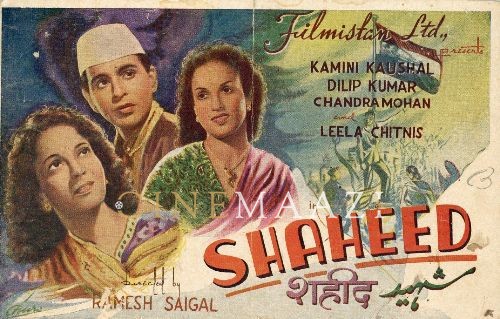