The Army that invaded India under Babar was feeling tired of its long long march through icy hills and marshy dales. It was also sore with privations. Soldiers thought of refusing to go further and there were mutinous whispers.

But Babar was undaunted. He continued to march on, and ultimately defeated Ibrahim Lody in the battle of Panipat. Babar was crowned Emperor of India.

The easy Court-life following hard on the heels of a long rough camp life brought dishonesty and dissensions in its train. So many faces turned away from duty. So many faces turned towards luxury. The only man who stuck steadfast to his post of duty and to his sense of loyalty was his faithful Sardar Sheikh.

This Sheikh had one daughter Hamida. Hamida was in love with Humayun the Prince-Royal of Babarshah and Humayun returned her love with interest.

Humayun, though he had accepted the intercession of his father, in the interest of the political unity of India, could not forget Hamida and fell ill. Inspite of everything Babar could do, Humayun continued to grow worse.

Babar at last had the sense to go in person to the Sheikth and bring back Hamida with him.

But was he too late? Or was he not? Babar prayed to God, prayed earnestly that his sanctioning of Humayun's Love for Hamida might not be too late.
But Humayun was too far gone and only a great sacrifice on the part of Babar could save his son.

And History has with respect and honour recorded the sacrifice Babar made-the greatest that a man, an emperor, a father can make, and the same story has been portrayed here with equal respect and equal honour. 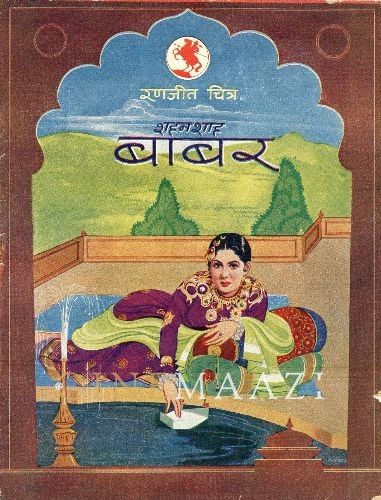