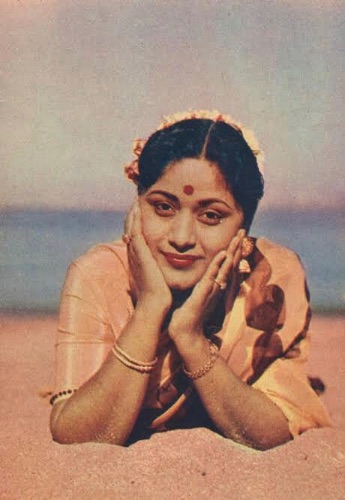 Hindi film actress Sulochana Chatterjee is known for films such as Jahan Sati Wahan Bhagwan (1965), Veer Ghatotkach (1970) and Aaja Sanam (1968). Active during the period 1942 – 1980, she made her debut with the film Shobha (1942). Films such as Paigham (1943), Vishwas (1943), and Aina (1944) followed. Her simple charm was suited to village belle roles. Seen mostly in supporting roles, she also played the lead in a few films such as Veena (1948). She featured in approximately 90 films in the course of her career, also appearing in a few Bengali films.

Born in Chandranagar, Sulochana was the daughter of a military man. The family, comprising five girls and one boy would travel along with their parents to wherever their father was transferred. Moving from Calcutta to Jubbulpore, Sulochana was schooled in this city. She also participated actively in school dramatics. After some time the family moved to Bombay on a transfer, which opened the doors to films. Her younger sister, Kamla, was spotted by Sohrab Modi, who was a friend of their father's. Kamla went on to appear onscreen as a child star in Modi's film Jailor (1938).

Soon the acting bug bit Sulochana as well, as she would visit the sets on which her sister worked. Offered acting roles, she made her debut with Shobha which released in 1942. Directed by Kumarsen Samarth, the cast of the film included Shobhana Samarth, Shahu Modak, Karan Dewan, and others. She featured in a string of films in quick succession, including Taxi Driver (1944), Beda Paar (1944), Harishchandra Pictures' Aina (1944), Prabhu Ka Ghar (1945), Shahjehan (1946), Mera Suhaag (1947), Veena (1948), and several others.

Aina saw her co-starring with Trilok Kapoor, while the comedy Ladli (1949) saw her featuring with Jairaj, and Grahasti (1948), a memorable hit, featured her alongside Yakub and Masood.

Sulochana also acted in a few Bengali films such as Apanaela, which was produced by Saroj Mukerjee and directed by Benoy Banerjee. She was cast opposite Pradeep Kumar in the lead. Benoy Banerjee's Minoti saw her star alongside Smriti Biswas and Paresh Banerjee.

A gifted linguist, she was fluent in Bengali, her mother tongue, as well as Hindi, English, Marathi, Punjabi, Kutchi and Gujarati.

Sulochana Chatterjee passed away in 1999.