Great indeed are the powers of Shree Ganesh, who is the most adored of all the Gods. No wor-ship is acceptable to any God, without the worship of Ganesh. Created by Parvati herself with the boon of Shiva's supernatural powers, it was Ganesh who defied even Shiva and shook the whole universe.

Many fascinating legends are attributed to Ganesh. One of them is about the moon god mocking at Ganesh and being punished by an eternal curse, which states that whoever glances at the moon on Bhadrapad Chaturthi will become the victim of a false charge.

No less a person than Lord Krishna himself, fell a victim to this curse when he saw the moon from the chamber of his consort Rukmini. A few days after this episode Krishna happened to rescue Satyabhama the beautiful daughter of Satrajit. Both developed a deep affection for each other and Krishna was helped in his romance by his childhood friend Mansukh.

But Satrajit and his brother Prasain arranged her marriage with Shatdhanva. Hearing of an acute famine in Mathura, Krishna requested Satrajit to lend his Syamantak Mani which kept away famines. But he firmly refused. In order to safeguard the Mani, Prasain took it every night to the jungle. But he was killed by a lion and the Mani was taken away by Jambuwant, the king of the Bearman.

Now Satrajit accused Krishna of killing Prasain and stealing the Mani. Krishna swore to forsake the throne of Dwarka till he cleared this charge. His searches took him into the cave of Jambuwant, the bear king. A long fight ensued, at the end of which Jambuwant gave his daughter in marriage to Krishna and the Mani as the dowry.

Thus the curse of Bhadrapad Chaturthi was overcome by Shree Krishna who was himself a great devotee of Shree Ganesh. 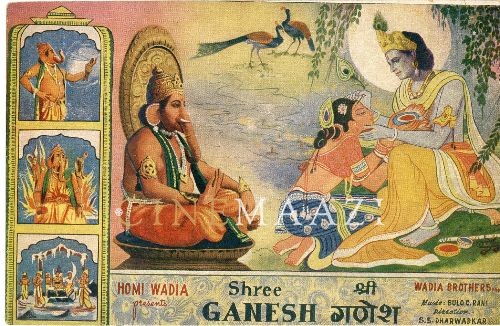