Rajesh was the toast of the theatrical world, the greatest director-actor the stage had ever known. He had already won every acclaim any artiste could hope for, but still Rajesh looked for further fields to conquer. His one fiery ambition was to produce "Sitaron Se Aagey", a brilliant stage play, though he must first find the girl who would be the ideal choice for the leading role.

Rajesh's casual visit to a cheap gambling den proved a boon. There he found Kanta, a beautiful young dancer. She was indeed the girl he had been looking for. With Kanta, Rajesh knew " Sitaron Se Aagey " would be a sensation.

Rajesh learnt that Kanta had been entangled with Banwarilal, who ran the gambling den, to discharge a large debt her uncle had run up to offset his gambling losses. Unless this was paid off, she could not leave the den. Rajesh quickly made the arrangements, and Banwarilal was forced to take the money, much as he would have liked to have kept a lien on Kanta.

And so it was, as the play reached its climax, Rajesh met with a serious accident. Only it was no accident. It was just as Rajni had planned.

The best-laid plans do go wrong. Rajesh was out of the way, seemingly for good, but Kanta soared towards stardom. Rajesh came out of hospital, crippled and incapable of appearing on the stage. His one desire was that Kanta should reach the great height he had foreseen. But Rajesh was no longer wanted. He was no longer a star! No longer good enough even to direct!

Would Rajesh walk out of the stage forever? Could Kanta turn against the man who had discovered her? What happens when one dreams of sailing beyond the stars? "Sitaron Se Aagey" holds all the answers. 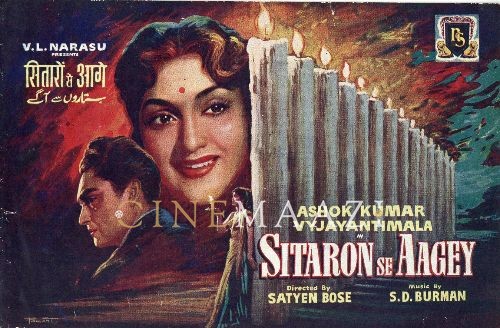