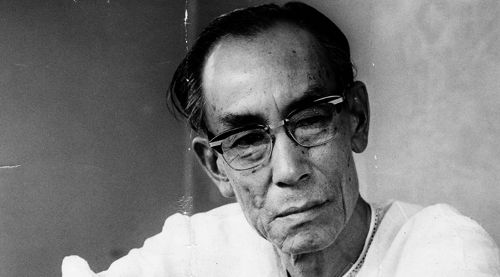 Sachin Dev Burman was born on October 1, 1906 into the royal family of Tripura. He started his training in classical music under his father, the sitarist and Dhrupad singer Nabadwaipchandra Dev Burman. As a school going boy, Sachin’s greatest passions were music and football. Gifted with a rich voice, Burman enjoyed performing for an audience, even though his parents did not approve of him entertaining those not in the royal family. There were also a few occasions when his gift for singing saved him from peril.

While studying for his degree at the Presidency College in Calcutta, Sachin spent his spare time studying folk music and singing. He was vocally trained by masters like K.C. Dey, Ustad Allauddin Khan, Bishmadev Chattopadhyaya, Kazi Nazrul Islam and Ustad Badal Khan, who gave him a good grounding in Hindustani classical music and flute playing, which was taught to him by Ustad Allauddin Khan. Contrary to the wishes of his family, the young man devoted himself to music once he graduated, and soon became a singing star of the Calcutta Radio Station famous for the folk music from the North East of India. By 1930 he was quite popular as a folk and classical singer in the Bengal region. In 1932, he released his first recording and released a total of 131 Bengali songs over the following years.

S.D. Burman began his career as a film singer with Yahudi Ki Ladki (1933). The songs were composed by Pankaj Mullick. Later, the song he sang was re-recorded in Pahadi Sanyal’s voice. Sachin Dev continued to sing in films like Sanjher Pidim (1935). It was during that time that he came in contact with K C Dey, who took him under his apprentice and later the poet Kazi Nazrul Islam, with whom his association lasted for years. He got to act and sing in Bengali films as Sanjher Pidim and Bidrohi. Though many thought his voice was thin with a nasal twang to it, he consistently sang for a few films. He also started composing music for Bengali plays like Sati Tirtha and Janani. One of the earliest films he composed music for was the Bengali movie Rajkumarer Nirbashon (1940). He composed for around 16 Bengali movies, few of them being Jakher Dhan (1939), Amar Geeti (1940), Pratishodh (1941), Pratikaar 1944), Kalankini (1945), and Matrihara (1946).

S.D. Burman’s ability to compose as well as sing made him a favourite of music lovers all over Bengal. With his gramophone records selling rapidly, he was soon proclaimed the Saigal of Bengal. Despite his burgeoning success, he retained his passion for learning new kinds of music, and his travels abroad continued to enrich his knowledge throughout his career. Many of his insights about the new forms he encountered made their way into his more experimental compositions.

Burman sang the Hindi song Dhire se jaana bagian mein in the early 1940s. Around this time, the Indian People’s Theatre Association was formed, and he became an active member. Here, he had the chance to discuss his work with other musicians. His work at the IPTA enhanced his knowledge of popular forms of music and encouraged him to undertake experiments in choral and solo singing. His work with different rhythms at this time helped him become a master of kaherwa and dadra.

Meanwhile, S.D. Burman married Meera on February 10, 1938 while they were students of music together. Their son Rahul, nicknamed Pancham, later went on to become a renowned music director as well, starting as an assistant to his illustrious father.

As a member of the IPTA, Sachin Dev could perform for crowds varying in size and composition and judge their reactions to his compositions. Meanwhile, he made his debut as a music director for Hindi films with Filmistan’s Shikari (1946), starring Ashok Kumar. The song Har din hai naya har raat nirali hai sung by Ashok Kumar and Amirbai Karnataki became a huge hit. But a single song doesn’t guarantee success and the next few films of S D Burnam weren’t as well received. His next project was the acclaimed Eight Days/Aath Din (1946), written by Saadat Hassan Manto and directed by Ashok Kumar and Dattaram N Pai. The film boasted of a few good songs like Umeed bhara panchhi tha khoj raha sajni and Ik nayi kali sasural chali, the film flopped and Burman Da had planned to return back to Bengal. He was stopped by film producer S Mukherjee who convinced him to stay back. His next two films Chittor Vijay and Dil Ki Rani were flops as well. His breakthrough came with Do Bhai (1947), for which he composed the songs Mera sundar sapna beet gaya and Yaad karoge, yaad karoge, ik din humko yaad karoge which changed the path of his and Geeta Dutt’s careers. Burman Da eventually went back to Calcutta for some time. Before he left, he stayed and completed work on Mashal (1950). His music for the film was very well received. Manna Dey’s song Upar gagan vishaal is remembered to this day for S.D. Burman’s extraordinary composition.

The success of Mashal ensured that S.D. Burman received an offer to work with the Anand brothers’ production house Navketan. His first assignment with them was Afsar (1950), but it was Baazi (1951) that topped the charts. The song Tadbeer se bigdi hui taqdeer voiced by Geeta Dutt and picturized on Geeta Bali was a raging hit. Burman had found his place at Navketan. He wrote the music for a majority of films starring Dev Anand and nearly every film produced under the banner. Dil jale to jale from Taxi Driver (1954), Aye meri topi palat ke aa from Funtoosh (1956), Aaja panchi akela hai from Nau Do Gyarah (1957), Hum bekhudi me tumko pukar chale from Kala Pani (1958) and Khoya khoya chand and Rimjhim ke taraane le k aayi barsaat from Kala Bazaar (1960) were some of his best collaborations with Navketan Studios. His biggest hit with Navketan was Guide (1965) of which almost all the songs were a huge success. Piya tose naina laage re, and Aaj phir jeene ki tamanna hai sung by Lata Mangeshkar, Tere mere sapne ab ek rang hai and Kya se kya ho gya bewafa sung by Mohammed Rafi and the Lata-Kishore duet Gaata rahe mera dil were all huge hits and still hold the same place amongst the lovers of Hindi cinema music. He himself sang two songs for the album - Allah megh de paani de re and Wahaan kaun hai tera musafir, brilliantly capturing the existentialism of Dev Anand’s character. It was during the making of Guide in 1964 that Burman Da suffered from his first heart attack and had to be hospitalized for a few months. He had just recorded one song for the film and was anxious if he would be able to complete the music for the album. It is said that Dev Anand waited for Burman Da to get better and complete the recording as he would not have anyone else do the music for the film. Guide went on to become a landmark film and the music was simply divine.

Burman Da’s only weak point in the Hindi cinema was his lack of knowledge of the Hindustani and Urdu language which he overcame with the help of his assistant Jaidev who knew Hindi well. This though didn’t hinder his work at all as he had long lasting collaborations with some of the best songwriters of that time. He worked with Majrooh Sultanpuri in films such as Paying Guest (1957), Lajwanti (1958), Solva Saal (1958), Manzil (1960), Chalti Ka Naam Gaadi (1958), Bambai Ka Babu (1960) and more. The collaboration resulted in songs like Chhod do aanchal, Aaja chaaye kaare badra, Chanda re chanda re, Hai apna dil to aawara, Yaad aa gyi vo nasheeli nigaahein, Haal kaisa hai janaab ka, Babu samjho ishaare and Ek ladki bheegi bhaagi si among many others.

His other famous collaborations were with the lyricist Shailendra and Sahir Ludhianvi. With Shailendra he made music for songs like Chaand sa mukhda kyun sharmaya and Baat badhti gayi khel khel me for Insan Jaag Utha (1959), Tere khyalon mein and Tere bin soone nain humaare from Meri Surat Teri Aankhen (1963) and O panchi pyaare saanjh sakare and Ab ke baras bhejo bhaiya for the film Bandini. Unlike Majrooh and Shailendra who could work easily with the tune provided for the songs and then write lyrics based on it, Sahir was a different person. He felt strongly about his writing and couldn’t work on a tune already provided to him. Even with this tussle of art, they produced some of the best works together. They worked in films like Munimjee (1955), Taxi Driver and House No. 44 (1955), though their best work came with Bimal Roy’s Devdas and Guru Dutt’s Pyaasa. The music of Devdas was focused more on Chandramukhi, the tawaif and Sahir and Burman Da’s combination resulted in some of the best dance numbers of the late 50s. Jise tu qubool kar le vo ada kahan se laun and Ab aage teri marzi ho saiyaan bedardi, both sung by Lata were huge hits. Talat Mahmood’s solos Kisko khabar thi kisko yakeen tha and Lagi re yeh kaisi captured Devdas’ sorrow brilliantly.

Pyaasa’s songs were rare gems of melody and poetry combined. The songs Jaane kya tune kahi sung by Geeta Dutt, Jaane vo kaise log the by Hemant Kumar, Hum aapki aakhon mein a duet of Rafi and Geeta, Sar jo tera chakraye a solo by Rafi or even the lesser famous ones like Jinhe naaz hai hind par and Ye duniya agar mil bhi jaaye to kya hai are all musical gems. Pyaasa was the last collaboration between Sahir and Burman Da.

His reign as the leading musician of Hindi films lasted throughout the 60s and 70s as well. He refused to be slotted in any kind of genre, classical or folk, funny or sorrowful he composed all of it. His apprentice in Hindustani classical music was visible in the different kinds of raags he used for his songs. The songs like Nazar laagi raja tore bangle par and Won na aayenge palat kar are based on Raag Khamaj, Piya tose naina laage re is Mishr Khamaj while Chaand phir nikla is based on Shudh Kalyan. He even used the Pahadi folk tune in some of his songs like Dil pukare aare aare, Phoolon ke rang se and Rula ke gaya sapna mera. The vast range of musical note and textures cemented his legacy as the ace musician of the Indian cinema.

Unfortunately, S.D. Burman went into a coma soon after rehearsing the song Badi sooni sooni for Mili (1975). He was quite adamant on recording the song in his presence but was hospitalized and Kishore Kumar recorded the song and sent the tape to the hospital. As the legend goes Burman Da was in tears on listening the song as it was exactly what he had wanted it to be. He passed away on October 31, 1975 in Bombay. The rest of the songs of Mili were completed by his son R D Burman. The films Barood (1976) and Arjun Pandit (1976), for which he had already composed music were released after his death. Over the course of his 29 year long career S D Burman composed songs for around 92 films. He also showcased his range of singing with songs like Sun mere bandhu re from Sujata, Safal hogi meri aradhana from Aradhana, Doli mein bithaike kahar from Amar Prem (1972) and Zindagi aye zindagi and Piya tune kya kiya re from Zindagi Zindagi (1972). He won several awards for his compositions as well: two Filmfare Awards for Best Music Direction for Taxi Driver and Abhimaan, two National Film Awards, one for Aradhana and the other in Best Music Direction for Zindagi Zindagi. He was also felicitated with a Sangeet Natak Akademi Award in 1958. He was the only composer working till his last breath at the age of 75 and produced songs that are still remembered generations later and his contribution to the Hindi cinema music is certainly unprecedented even decades after his death.