The time of this story dates back to the heyday of British rule in India when the blood-sucking Zamindar was having a field-day at the expense of the poor farmers. On one side of the Freedom movement was Gandhji with his creed of nonviolence and non-cooperation; on the other were the violent revolutionaries. Both, in their own ways, were waging a war of Freedom against the British and the local toady institutions they had helped sprout.

Sallu is a farmer, living with his mother, brother and nephew. When the village folk go to harvest the crop, the British protected Zamindar prevents them from doing so because his taxes and other dues have not been paid. To save Sallu from the ensuing violence, his brother jumps into the fray and pays for his impetuosity with his life.

When, determined to avenge his brother's murder, Sallu reaches the Zamindar's house, he finds the latter attempting rape on Jammu, Sallu's sweetheart. In the skirmish that follows, the Zamindar loses his life and Sallu has to run away. In order to escape the wrath of the authorities, he becomes a fugitive and makes his home in the Jungles.

He comes to know that the cruel money lender has gone to his own house and is about to deprive his mother and orphaned nephew of the only roof they have. He assumes an incognito and goes to reason with the greedy shark, failing to cut any ice he beats him up, deprives him of all his money and distributes the loot among his fellow villagers.

Thus he becomes a "robber" (Daku) in the eyes of the prevalent law and the Government enlists the aid of a British police officer named Young to capture him - dead or alive. A reward is announced for his arrest, but Sultana evades all the dragnets placed around him successfully. One day, however, something happens in his life which compels him to surrender himself willfully to the police.

What this occurrence is and how it comes about is a puzzle which you have all came here to see unraveled. 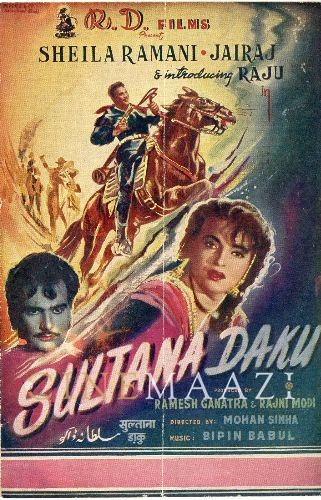