'Sikkar' Shanmugasundaram (Sivaji Ganesan) is a Nadaswara vidwan who is very sensitive and gets irritated fast, earning him the suffix 'Sikkal' meaning troublesome. While performing at a temple festival, irritated with the noise of crackers bursting in the temple grounds, Shanmugam stops his performance abruptly and walks out. As he steps out, he meets famous dancer Mohanambal (Padmini) who is just entering to perform. Having just heard his music, she has fallen for it and requests him to honour her by watching her perform. But an egoistic Shanmugam does not agree, and she teases him, stating that he is scared that she would ask him to set tunes to her dance. He challenges her, saying he would make her dance to his tunes and prove that he is the better artiste. She accepts the challenge and the competition is fixed at Thyagaraja temple at Thiruvaiyaru.

He goes back to his lodge; when his accompanying musicians express a desire to watch her perform, he refuses. But they all slip away to go and see her performance, leaving him alone in the room. Shanmugam also gets curious and secretly enters the venue, but Mohana notices him and teases by dancing for the song, 'Maraindhirundhu Paarkum Marmam Enna?' (What is the mystery behind watching me secretly?) Both develop a fondness for each other based on their talents.

Nagalingam, a rich landlord, falls for Mohanambal. Since she is a nautch girl, he plans to make her his concubine; he starts wooing Mohana's mother Vadivambal (C.K. Saraswathy) by presenting her with a diamond ring. Mohana does not yield to her mother's influence and insults Nagalingam. An angry Nagalingam makes plans to kidnap Mohana and sends goons. Jiljil Rojamani (Manorama), Nagalingam's erstwhile concubine, overhears this, informs the village elders, and averts the kidnapping. After this incident, both Mohana and Shanmugam happen to travel by the same train with their respective troupes, and their fondness increases.

Chelladurai (K. Balaji) learns about Mohana from Vaithy (Nagesh). Desiring to start a relationship with her, he visits her with a gift. At the same time, Shanmugam also visits her house. On seeing Vadivambal receiving Chelladurai with warmth, Shanmugam jumps to the wrong conclusion about Mohana's character and leaves, even ignoring Mohana, who is just entering her house. Mohana reprimands her mother for encouraging people like Chelladurai and for insulting Shanmugam. A depressed Shanmugam goes to watch a performance of Rojamani and stays there for a few days. Mohana's assistant passes this information to her, making her suspect an affair between Shanmugam and Rojamani.

Chelladurai requests Vadivambal to send Mohana to watch Rojamani perform so that he can spend some time with her. But Mohana looks at it as an opportunity to meet Shanmugam and question him. When she arrives, Rojamani clarifies that she shares a sibling kind of bond with Shanmugam and wishes to see him marry Mohana. A happy Mohana tries to pacify an angry Shanmugam, but he refuses to budge. When Mohana learns that Shanmugam is likely to proceed to Malaysia, she reminds him of his challenge to compete with her and holds him back. As planned, the competition is arranged at Thyagaraja temple at Thiruvaiyaru.

Shanmugam and Mohana compete with each other and impress the entire audience with their performances. Both are declared winners. Shanmugam, awed with her performance, confers the suffix "Thillana" to her name. Nagalingam, who is angry with Mohana for not accepting his advances, throws a poison-tipped knife at her at the end of their performance, but it hits Shanmugam, injuring his arm and he is hospitalized. Vadivambal, who disapproves of her daughter's friendship with Shanmugam, prevents her from talking to him. Mohana is unable to break free from her mother's control to meet him during his illness.

After he recovers, when both perform together in another city, Mohana enquires about his health by dancing for the song 'Nalamthana' (meaning are you fine?) impressing the audience. The chief guest at the function is the king of Madanpur (M.N. Nambiar). Impressed with her performance, he invites her (through Vaithy) to perform at his palace. Vaithy convinces her to come by manipulating Shanmugam also to come and perform there. Both of them reach the palace, where the king invites Mohana to a secluded room on the pretext of introducing her to his sister, where he tries to molest her. Shanmugam follows her and gets upset when she enters the private room of the king. Mohana pleads with the king not to harm her and let her leave; when he does not oblige, she threatens to stab herself. The queen arrives, appreciates Mohana's integrity, and rescues her. The king apologizes to Mohana and lets her go. When Mohana comes out, Shanmugam assumes that she is a woman of loose morals and abuses her for cheating him. When she tries to explain, he slaps her.

Feeling let down, Mohana goes back to her room, locks it, and tries to commit suicide. The king arrives by then and reveals what had happened to Shanmugam, who regrets his mistake of not trusting her and rushes to meet her. He breaks open the room, saves Mohana from the noose, and apologizes to her. Shanmugam and Mohana marry with everyone's blessings. Finally, music and dance unite and make everyone happy. 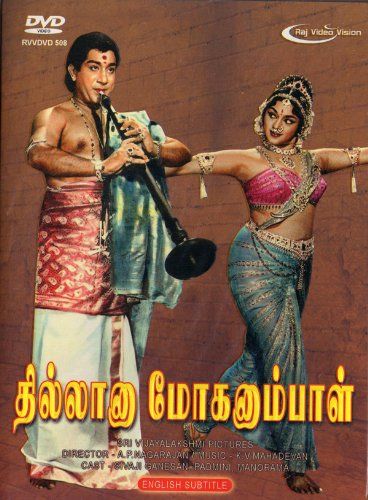