JAYPAL SINGH, the virtuous ruler of Sarup Nagar was getting old and had to rely for the pro per administration of his state on his Prime Minister Ajit Singh who was intriguing to have the throne for himself.

Indra the king's young and beautiful daughter, was returning home after completing her studies in England.

Ajit Singh, who was waiting f or a chance to remove the king from his way found this to be the right moment to fulfill   his evil desire. He forgot however, that "Man proposes but God disposes". A mystery man, popularly called "Thunder" came on the scene to rescue the noble king and his daughter.

Kishore, a loyal servant of the state, was deeply in love with Prabha the beautiful daughter of Ajit. On the one hand he was attracted by his love to Prabha and on the other by his loyalty to the king.  He chose the path of duty even at the sacrifice of his best love, if need be. Accordingly, he kept himself more and more away from Prabha, much to her grief and sorrow.

Meanwhile she came to learn that her father Ajit Singh had planned to get Kishore killed.  Prabha could not bear this and sent a message with her maid asking hi m to see her at an appointed hour. The maid proved treacherous end delivered the message to Ajit, who allowed the message to be sent to Kishore only to get him in his trap.

It was mid-night and everything was quiet all round, when Kishore set out to meet his beloved Prabha. No  sooner  did  he step  into her  room  than  he was f aced with Ajit's men waiting to  make  him  a captive. Kishore fought them single-handed and made good his escape, delivering many deadly blows to his opponents.  However, he left with an  impression  that  in calling him at that  hour Prabha was a party to her father in his evil  designs against  him .and  consequently  he swore vengeance against her.

Now when Prabha was sobbing in silence, Kishore once more came to her room burning with rage and determined to avenge what he considered her treachery.

Immediately, Ajit's men who were following Kishore, hard at his heels, came on the scene, followed by Ajit who ordered Kishore to be imprisoned. Prabha could not bear this being done before her very eyes. She stood in the way between Kishore and Ajit's men and bade them not to move an inch. In the meantime, Kishore made good his escape, but was convinced that his beloved Prabha had not betrayed him.

The people were also much oppressed by the cruel acts of their Prime Minister Ajit, and were looking for a saviour.  This they found in the person of "Thunder" who was burning with Patriotism in every inch of his body.

See how he overturns the evil designs of the prime minister and re-establishes peace and order in the kingdom ! 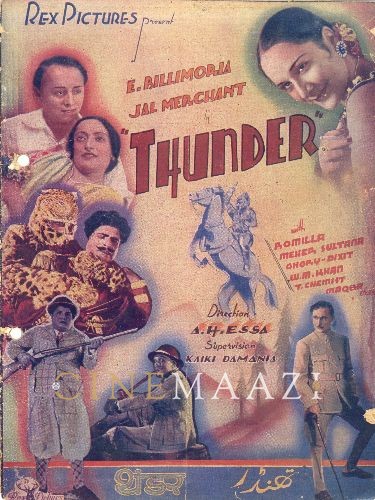