Police Officer Hanuman Prasad brings his pregnant wife to hospital for delivery. At the same time Ramesh Kumar, a magician, also brings his pregnant wife for delivery there. Unfortunately, his wife delivers a still-born child. She is in an unconscious state, but Ramesh Kumar is worried that when she recovers her consciousness and discovers the fact that her child is born still-born, she will die with shock. On the other hand, Hanuman Prasad's wife delivers twin-boys. When Hanuman Prasad learns of the serious plight of Ramesh Kumar's wife, he offers the magician one of his new-born sons, saying: "Perhaps God has blessed my home with two sons so that one of them may become the light of your house."

The two little boys grow up separately, in separate homes. One grows to boyhood in the magician Ramesh Kumar's house, and the other in his own father's house, Ramesh Kumar is a famous magician who performs several dare devil tricks, his final trick is one in which he gets himself locked up in a closed box and thrown in the river, from where he is supposed to escape like Houdini. But he suffers a heart-attack while he is locked up in the box under-water, and dies. The people who have gathered to watch him perform the trick jeer at the magician's attempt to perform this impossible trick which resulted in his death. But his little son, Shyam, vows to perform the same trick one day and to prove that it could be done.

The little boy comes to a Hanuman temple to pray with this resolve. A clear sign of secret powers is revealed to him and he becomes `Toofan'

Meanwhile, Shaitan Singh goes to a Doctor to treat his hand. The Doctor recognizes him, and rings up the police. Shaitan Singh is caught, and sent to jail for 14 years. When he comes out, at the end of his long sentence, the two little boys have grown to young manhood. `Toofan' is the terror of goondas and killers. And Shyam does magic tricks in the streets. A gangster, Vikram Seth, sees Shyam performing tricks and gets an idea. He involves Shyam in a fraud, and gets him in trouble. Shyam's friend, Gopal, helps him out by a supreme self-sacrifice, and then leaves for his village. But the goondas follow him there, and finally kill him in front of his son. Shyam comes to the village, searching for his friend, and learns of what befell his poor friend Gopal. Shyam vows to Gopal's son that Gopal's killer will die in the same way.

On the other side, `Toofan' catches up with Shaitan Singh. In a fight, Shaitan Singh tricks him and pushes him off the cliff. Toofan falls in the stream, unconscious. There he is discovered by Shyam's girl-friend, who takes Toofan for Shyam, but finds him quite changed in character She prefers this changed version of that other Shyam. Meanwhile the real Shyam meets Toofan's girl-friend, Radha, who takes him for Toofan, but likes him better now for the new kind of man he seems to have become.

Finally, Toofan lands up at the village where he runs into Shyam. The two brothers come face to face, and the whole story comes out. The two brothers now come together and find Shaitan who is on the point of digging out the gold consignment from the ground.

In the climax, Toofan and Shyam fulfil their respective vows: Shyam's vow to Gopal's son that his father's killer will die the death he deserved, and Toofan's vow to the ACP that he will clear up his father's name from the case of the gold consignment. 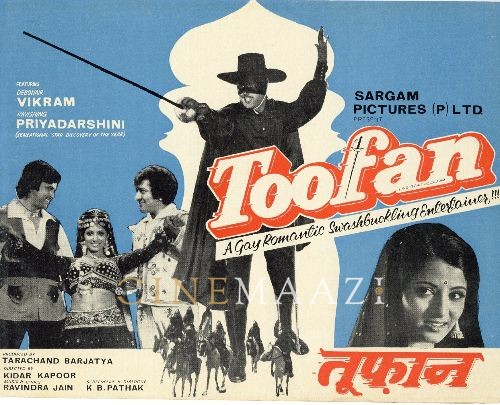