Nandu, the mischievous twelve-year-old romping through the lanes and alleys of Amritsar, rushing through the crowded bazaars ragging the boys, teasing the girls till one day, he met Kamli.........and within a few minutes of their introduction asked her, "Are you engaged? " Kamli, only eight years old, scoffed at his audacity, blushed, and ran away.

Ten years later -Nandu and Kamli met again. As soon as they had recognised each other, he asked her, "Are you engaged? Overawed by his boldness, pretty Kamli blushed red, scoffed at him tenderly, and ran away, his roaring laughter still ringing in her ears.

Within a few months, Nandu's mother tried to bring about their marriage but Kamli'suncle opposed the proposal vehemently and turned it down on the grounds that Nandu was nothing but a vagabond, a good for nothing. The old lady bowed her head in shame but Nandu was shaken to the bones. The realisation that he must do something at once and make someone of himself if he wanted to redeem Kamli, drove him to join the Armed Forces. But when he returned to claim her, he learned that she had been engaged to marry someone else. Nandu's world crashed. His hopes vanished. Disillusioned and broken-hearted, he returned to his regiment.

Came the day when soldiers from the different headquarters collected at Ambala to proceed from there to the front. Arriving at the Ambala station platform, Nandu suddenly came face to face with Kamli. It was a delicate, dangerous moment. Kamli surprised to see him after a long time. Nandu wondering whom she had come to see off. There he comes to know that she is married to Havildar Ram Singh of his unit. Unable to bear, Nandu turned to go but Kamli called him back. Nandu stopped, turned and looked at her. Kamli said something and having given a solemn promise Nandu looks at Kamli for the last time and goes out.
At the front Nandu's unit is rushed into action. The unit is ambushed and Nandu displays great heroism and saves his unit from annihilation. Nandu did fulfill the solemn promise he had given to Kamli,

What was the promise and how it was fulfilled? See it on the screen. 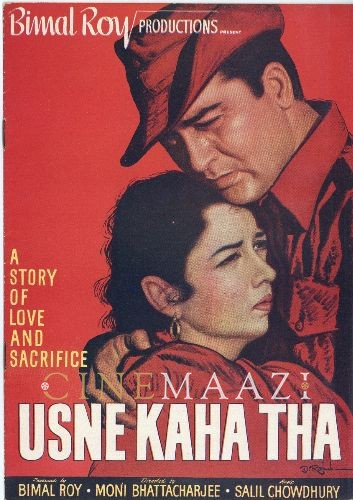