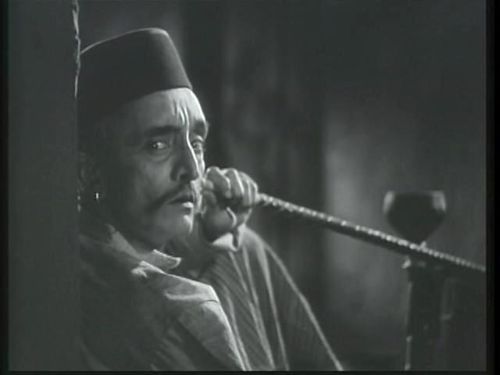 Rashid Khan was born into a poor family in Baroda, Gujarat on July 5, 1915. He spent the majority of his childhood struggling to make ends meet. He was compelled to quit school when his parents could no longer afford to pay his monthly fees. Following this, he took up any odd job that came his way, often working as a coolie to earn a livelihood.
Though he enjoyed acting, Rashid Khan’s interest lay in painting. He did not intend to pursue a career as an actor, but his performance in a student play impressed Dr. Ambalal Patel of Sagar Movietone greatly. He offered him a place at the production house, which Rashid politely declined. Later, he was introduced to a painter in Bombay who coloured select sequences in film reels. Rashid quickly picked up the skill, and was painting reels by himself soon enough. However, painting film reels did not provide him with a large income, and he started working as a member of the production team at the All India Radio office in Bombay. While working there, he also became involved with the Indian People’s Theatre Association.
When Balraj Sahni, the writer, director and actor returned from London, he was asked to direct the play Zubeida for IPTA. On the lookout for actors for the play, Sahni saw Rashid at India Coffee House, deep in conversation with Chetan Anand. At his very first glance, Sahni was convinced that this was the man for the job. Though Rashid was reluctant at first and did not want to risk a steady job at the radio, he eventually gave in to Sahni’s persistence and accepted his offer a mere four days before the premiere of the show.
When IPTA decided to venture into the medium of cinema with the classic Dharti Ke Lal (1946), Rashid was offered a role in the film as a priest who also teaches children in the village. He accepted readily, having enjoyed his stint with Zubeida. However, it was with Navketan’s Baazi (1951), Guru Dutt’s directorial debut, that Rashid Khan shot to fame. His role as Pedro, the hotel owner, gained him recognition, and his association with Navketan, starting from Afsar (1950), continued for years to come. He became a regular cast member in most of the films produced under the banner. A talented and versatile character actor, Rashid Khan stood out in every role he played, whether as John the bartender in Hum Dono (1961), a compulsive gambler in Taxi Driver (1954), a cinema hall ticket seller in Kala Bazar (1960), and flute-playing assistant in the romantic comedy Tere Ghar Ke Samne (1963).
Rashid continued to work with other prominent filmmakers like Zia Sarhadi (Hum Log, 1951), Kidar Sharma (Bedardi, 1951), Bimal Roy (Parakh, 1960 and Do Dooni Chaar, 1968), Amar Kumar (Garm Coat, 1955), Moni Bhattacharya (Usne Kaha Tha, 1960), Raj Khosla (Bombai Ka Babu, 1960), Bhappie Soni (Ek Phool Char Kante, 1960) and Lekh Tandon (Professor, 1962), among others.
The evergreen actor and comedian passed away in 1972 in Mahim, Mumbai.