Should A Man Marry Two Women?

Answer is the story of "UTTAR DAKSHIN".

After the death of his Mother, Raja Verma (Jackie Shroff ) comes to know that his father is alive and is one of the Richest Man of the City living with his Second Wife (Bharati) and a son named Shankran (Rajanikant) while his Mother Sharda Devi (Seema) lived in poverty and hardship for 22 years and died of Cancer, hiding and bearing the torture of separation from her husband because of the Second Woman.

So Raja decides to destroy his father's South Indian Family. Krishnakant's arch business rival VardhaRai masterminds the whole plan for Raja who lands into Krishnakant's House and grows confidence and faith in the happy-go-lucky Shankran and Bharati while Krishnakant is away in America.

But things work in a different manner. Shankaran's childhood friend Chanda (Madhuri Dixit) the daughter of a businessman, falls in love with Raja while Shankran has grown love for Chanda.

Bharati comes to know the identity and intention of Raja and catches him while taking the signatures of Shankran on Forged Papers. But to the great surprise of Raja, she is ready to sacrifice everything including her property for him.

Raja fails in the house - comes out, waits for Krishnakant to come from America to confront him - to torture him - to destroy him.

And finally Krishnakant comes. Bharati tells him the whole story of the friendship and enmity between Raja and Shankran.

Krishnakant wants to meet Raja and family but they refuse.

How does Raja torture Krishnakant?

How does Bharati react?

How does Vardha act and use the dramatic situation?

An electrifying narration of human conflicts on the Screen.

The most dramatic story with new dimensions of Blasting Emotions and the Climax.

An entertainer with Superb Music, Tears and Laughter expressing Love and Hate of Two Step-Brothers.One from North the other from South.That makes the movie a Superb "UTTAR DAKSHIN".

A Movie to be seen and to remember always. 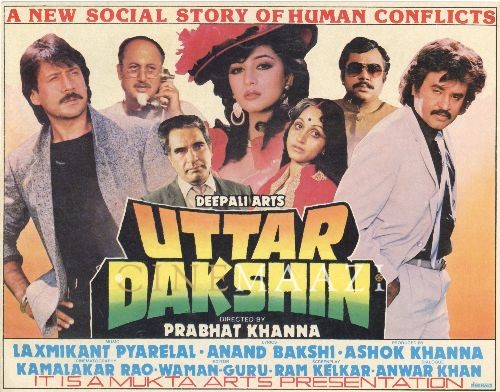