Rashid and his friend, Ratan, discover by sheer coincidence that Rashid resembles Zimbo, the King of the Jungle, in every detail—Zimbo, who is loved by Princess Zulina! Rashid and Ratan, who are in monetary trouble, think of a plan to fool Princess Zulina out of her treasure. But they needed money to go to the Zolan jungle. So Rashid makes a fool of Noota, the girl who loves him, and Noota in her turn makes a fool of Fakirchand who is in love with her.

In the jungle, after a plane crash, Zimbo finds a child called Mala. Zimbo and his beloved Leela adopt him as their son.

Somewhere in the jungle, Rashid’s party is attacked by Zulina’s men. Zimbo comes on the scene in the nick of time and saves Rashid and his men. Rashid introduces himself and Ratan as scientists.

Ziquon reaches the palace and complains against Zimbo to Rajguru and Zulina. Torak who hates Zulina and Zimbo, is furious at the news.

In the meantime, Rashid learns the habits of Zimbo, and one day decides to leave for Zolan. When Noota overhears Rashid’s plans, she is broken-hearted. Next day, near Zulina’s palace, Rashid disguises as Zimbo. Even his own men mistake him for Zimbo. Rashid and Ratan now start for Zulina’s palace. Zulina learns from her maids about Zimbo’s arrival and orders them to bring him to the temple.

Mistaking Rashid for Zimbo, Zulina shows Zimbo’s companion the royal treasury. Torak sees this and goes to inform Rajguru. Later that night when Zulina is asleep, Rashid and his companion go to steal the treasure. Rashid is caught, and Ratan is killed. Rajguru orders Zimbo and his entire party to be hanged.

Zimbo has gone hunting, when Rajguru’s men attack his house. His beloved Leela, his son Mala and others are taken prisoners and led to the palace. Finding this opportunity suitable, Torak and Zakon put Rajguru behind the bars, and try to prove Zulina guilty in front of the Darbaris.

In the palace, preparations are afoot to put Rashid, Zulina, Leela, Noota, Mala and others to death. When the real Zimbo comes to know of this, he rushes to the palace with Pedro.

Who saves all the people from certain death?

What happens to Rajguru?

What is the fate of Ziquon, Torak and Rashid?

What wonderful feats are performed by Zimbo, Pedro , Simba, Elephant and Mala?

(From the official press booklet 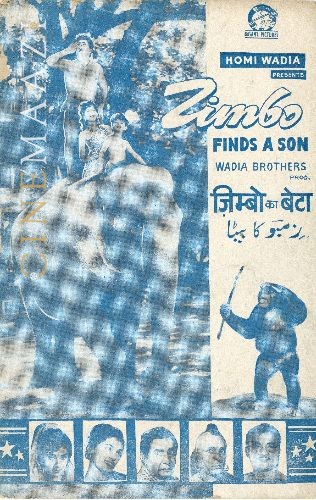