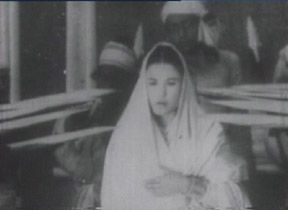 The story of the first lady of Assamese cinema is a true reflection not only of her times, but the manner in which the film industry would come to operate for years to come with regards to women actors and technicians. Born in Golaghat in Assam, Aideu Nilamber Handique would make history, but paid a dear price for it.

Aideu Handique was born on 27 June 1920 in Pani Dihingia Gao, Golaghat to Nilambar and Malakhi Handique. When Jyotiprasad Agarwala, the Roopkonwar of Assamese culture, was planning to make the first Assamese talkie, dominant conventions of theatre still dictated that men played female characters on stage and hence on film. Set on realizing his vision without any impediments, Agarwala asked his crew to help him find a leading lady for his film based on the story of an Ahom princess, Joymoti. When the filmmaker saw a picture of Aideu Handique taken by Dimbeshwar Gohain, his acquaintance and her distant relative, he decided to cast the young beauty in the titular role. Aideu was tricked into travelling to Tezpur, and cast as the protagonist of his film Joymoti (1935).

Aideu was not prepared for the hardship she would have to endure to become the actress Agarwala envisioned her as. While he taught her the techniques of acting, Agarwala also made directorial decisions often without the young actress’ consent. When a section of the narrative depicted Joymoti being tortured to death by the villain, Lora Roja (King Lora), Aideu was subjected to lashings to evoke the verisimilitude Agarwala desired.

When the film’s shooting was wrapped up, Aideu returned to her village only to find that her erstwhile community had decided to outcaste her along with her family. While some sources claim that she faced censure for having spent so many days with another man, others argue that the actress herself was confused, referring to her co-star in the movie as her Bongohordeo (husband). Her family appealed to be allowed back into the community, but Aideu herself led a long, lonely life. Villagers were so unwilling to be associated with her that they would not fetch water from the same well as her. She remained unmarried to the end of her life. Agarwala, meanwhile, never checked in on her after the completion and release of the film.

In 1985, during Assamese cinema’s golden jubilee, Aideu Handique finally had a chance to see glimpses of her own performance on screen. Later, fellow artistes like Bhupen Hazarika appreciated her work, but it was too little too late. Aideu also played a small part in the film Ganga Chilonir Pakhi (1976) and made a cameo appearance in the film Aideu, her cinematic biography. Unfortunately, she passed away on December 17, 2002, without having seen the film itself, which was released in 2007.