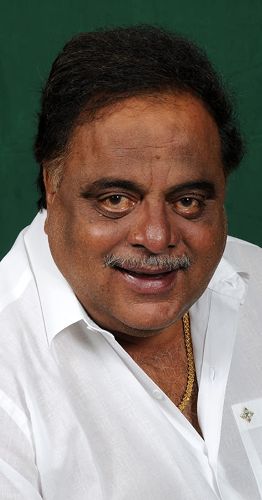 Known by several sobriquets - Mandayada Gandu, Rebel Star, Kaliyuga Karna, Malavalli Huchche Gowda Amarnath aka Ambarish (his screen moniker) was born on 29th May 1952 to Huchche Gowda and Padmamma, in Doddarasinakere Village, Mandya district, the sixth of seven children. With a grand-uncle, infamous violinist Chowdiah, the young Ambarish, after schooling in Mandya, moved to Saraswathipuram in Mysore, for higher studies.

Alongside thespian Dr. Rajkumar and his dear friend and contemporary Vishnuvardhan, who debuted at the same time, he was considered part of the triumvirate of celebrated actors, each with their own fan following. That Ambarish also turned politician, is a three-time MP from his home district of Mandya, is another chapter.

Ambarish’s dalliance with movies, which spanned over five decades, began when renowned Kannada cinema director Puttanna Kanagal launched him, alongside Vishnuvardhan, in his National Award-winning Naagarahaavu (1972).

His foray into films seemed destined. As much as it was against his wishes, he was pitchforked into a career in acting after close friend Sangram Singh recommended his name to director Puttanna Kanagal, who was in search of a new face to play a brief antagonist role in Naagarahaavu.

Asked to saunter in a certain style, deliver the dialogue in a particular manner and above all toss a cigarette in his mouth, famously done by superstar Rajnikanth, saw Ambarish being cast in the role.

Thus, was born the ‘Rebel Star’ - the moniker by which he was known throughout his lifetime.

Known for his fondness for his tipple, and an intimate, thick as thieves, friend of fellow actor Vishnuvardhan, saw him enthrall his loyal legions in roles that he played with panache. His swagger and rambunctious, guttural voice sent his fans into ecstasy.

He appeared in over 200 films and, like his Bollywood counterpart Amitabh Bachchan, played the angry young man in the 80s. Several films were tailor-made to suit that image giving him a certain identity with his fans. The most iconic of them all being the 1981 political satire Antha, in which he plays the rebellious cop. His other notable films include Ranganayaki (1981), Tony (1982), Rani Maharani (1990), Olavina Udugore (1987), Hrudaya Haadithu (1991), Hongkongnalli Agent Amar (1989), Mannina Doni (1992), and Odahuttidavaru (1994).

A ‘Kaliyuga Karna’ for his generosity towards his followers and diehard fans and friends, he was the first Kannada actor to inaugurate the world-famous Mysore Dasara festival organized annually by the Karnataka government.

Ambarish struck a chord with actress Sumalatha, after they first met on the sets of Kannada film Aahuti in 1984. They grew closer during 1987 when they worked together again in New Delhi. He thereafter proposed marriage two years later, and the couple wed on 8th December 1991. Their only son, Abhishek Gowda, too has followed his father’s footsteps, making his debut with Amar.

Suffering from a breathing ailment since 2014, he passed away four years later. On 24th November 2018, he was taken to a private hospital in Bangalore after he suffered a cardiac arrest at his residence. He was pronounced dead at 10:15 pm. Ambarish was cremated with full state honours and received a 21-gun salute. The final rites were performed by his son, Abhishek. He was cremated next to the memorial of his contemporary and friend, Dr. Rajkumar.