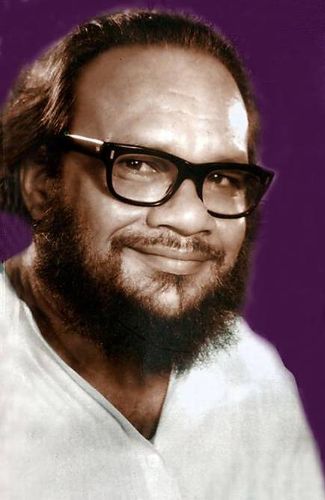 A popular and influential poet and lyricist, Arudra was born on 31 August, 1925 in Visakhapatnam, Andhra Pradesh. He shifted to Vizianagaram in 1942 to pursue higher studies. He started publishing poetry as a teenager. While in college he was involved in the Communist movement, influenced by Ronanki Appalaswami and Chaganti Somayajulu. He was also inspired by the poet Sri Sri. From 1943 till 1947 he worked in the Indian Air Force. After that, he decided to dedicate himself to writing, taking up the pseudonym Arudra.

Initially a romantic poet, his work took on a political flavour when he witnessed the violent repression of the anti-zamindari movement in Telangana by the Nizam’s Razakars. His most famous work Tvamevaham was based on these incidents. Shifting to Madras, he served as the editor of the Anandavani magazine for two years. He was also a noted playwright and translator.

He married K Rama Lakshmi, a noted critic and writer in 1954. He also wrote the Samagra Andhra Sahityam, which was an encyclopaedia of Telugu literature published in 12 parts between 1965 and 1968. He also wrote several patriotic songs during the Indo-China war of 1962. Recipient of the Sahitya Akademi Award in 1987, the celebrated poet passed away on 4 June, 1998.