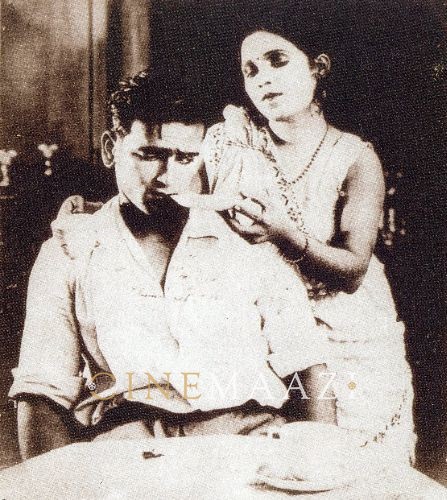 Leading actress of early black-and-white Indian cinema, Ermeline—who would later go by the screen name Sudhabala—is remembered as the first Goan to have carved a space for herself in the silent era of Indian cinema. Known as the ‘Mary Pickford of lndia’, who defined the ingénue type in cinema, she was a good dancer and a well-known Konkani stage actress too. She acted in more than 30 silent films in the course of her career. These include Sharif Badmarsh (1924), Swapna Sundari (1925), Sarovar Ki Sundari (1928), Cinema Girl (1930), Draupadi (1931), Toofani Tiruni (1931), Kalo Sawar (1932), and Raj Tarang (1935). She played a range of roles including Draupadi in the 1931 film of the same name, and Princess Chandraprabha in Zalim Jawani (1932). According to well-known film historian Bhagwan Garga, she was instrumental in giving Prithviraj Kapoor his first big break in films in Cinema Girl.

She was born Ermelinda Cardoso on 7 May, 1908 on the Divar island of Goa. Hailing from an impoverished family, her parents Paulo Faustino Cardoso and Maria Joaquina de Souza decided to move to Bombay in search of better prospects. She went on to be noticed by film agents who recruited actors for filmmakers.

In 1925, she made her debut with Hothal Padmini. Directed by Harshadrai Sakerlal Mehta, the film was written by G. Mohanlal Dave, while the film’s cast included Gangaram and Gulab. Glowingly beautiful and confident, she would feature in more than 30 silent films in the course of her career.

She essayed the lead female role in Draupadi (1931), a big-budget mythological production from Ardeshir Irani's Imperial Film Company which followed the release of their Alam Ara (1931), the first talkie in India. It was directed by Bhagwati Prasad Mishra, who had made a name for himself as a photographer and painter and had worked with Irani in his Star, Majestic, Royal and Imperial Studios. The cast of the film included Prithviraj Kapoor who played the role of Arjuna, and Khalil as Krishna. Cinematographed by Adi Irani, the film was based on an episode from the Mahabharata which showcased Duryodhan's plans of usurping Hastinapur and his subsequent attempt at shaming the Pandavas by disrobing Draupadi.

Her 1932 film Zalim Jawani was a historical fantasy, whose story was drawn from the Rajput war sagas. It featured the despotic Jaisingh (Poonawala) who usurps the throne of Achalgarh. The court intrigues involve the good Pratap (Vithal), lover of Princess Chandraprabha (Ermeline), hidden testaments from the dead King Udaybhanu, fortune tellers and a swayamvar (a public contest) to claim the princess as a bride. The film's treatment of sexuality received an unusual twist when the misogynist Sher Singh (Hadi), a friend of Pratap, is forced to impersonate a woman to protect Chandraprabha from the villain Ranamal (Jamshedji).

To Ermeline also goes credit for helping Prithviraj Kapoor gain a notable break in films. According to writer and researcher Mario Cabral e Sa, the male actor originally signed up for the 1930 film Cinema Girl was not accommodative with his dates. This led to considerable stress and losses, leading the film’s makers to suggest to Ermeline that she pick any possible actor of her choice from the crowd gathered at the shoot, to star in the film. She chose Kapoor, who had already appeared in small parts in films, thus giving him his first lead role. Kapoor would go on to establish himself and future generations of his family in the film industry.

The advent of the talkies severely impacted her career, as she was unable to speak Hindi properly. Relegated to playing vamp, as stars such as Sulochana shone, film offers ran dry.

Writer Mario Cabral e Sa’s book Location Goa records an incident that occurred during the shooting of Burkhawali – The Veiled Queen (1926) at the hill station of Matheran. Ermeline lodged a complaint with the superintendent of police against cameraman Chaturbhai Patel and director Khanjibhai Rathod, who had allegedly entered her hotel room and outraged her modesty. When the case reached the courts, the judge imposed a fine on Ermeline instead and questioned her character. Refusing to back down, Ermeline went on to appeal in the case and fought it till justice was delivered, and the previous judgment was overturned. The case grabbed considerable attention at the time and was covered by The Times Of India.

She married Saib Rocha, a renowned name from the world of tiatr or musical theatre popular in Goa, and also acted in one of his plays. The most popular tiatr in which she acted was Lusitanian Dramatic Co's Alma Vetat Sorgar on 17 October, 1932.

Said to have been battling hard days later in life, she nonetheless did not seek charity and reportedly even had Bhagwan Garga fired from his job with a newspaper after he penned a column calling for financial help for the star.