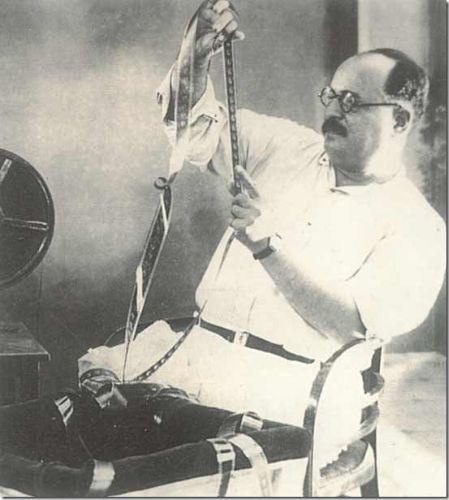 Responsible for the first sound film, or talkie, in Indian cinema, Ardeshir Irani’s name has been immortalized for his contribution to the world of cinema with Alam Ara (1933). Ardeshir Irani was born in Pune on 05 December 1886, and graduated from the J.J. College of Arts in Mumbai. Following his graduation, Irani became a schoolteacher. This work did not suit him well, and he started working as a kerosene inspector. When he felt restless in this position as well, he apprenticed himself to his father’s musical instrument and phonographic equipment business.

Cannily aware of the potential of the new medium of cinema and its rapidly growing audience, Ardeshir Irani procured a few films from other countries and started exhibiting them in India. He soon realized the need for a film theatre in India, as well as the vastly untapped market for film production in the country. In 1920, he launched the Star Film company, where he produced his first venture in 1922 under the title of Veer Abhimanyu. In total, he made nearly 32 silent films over his career.

Irani was extremely self-reliant when it came to filmmaking. Not only was he knowledgeable about the art of filmmaking, but soon, he had trained himself in cinematography, gained some skill in direction, and even wrote for films himself. When he saw one of the early talkies from Hollywood, he made up his mind to create India’s first talkie. To learn the technique of recording sound for cinema, he travelled to London. Within a year, the release of Alam Ara made history.

Alam Ara was screened in Mumbai on 14 March 1931. Apart from this landmark innovation, Ardeshir Irani’s well-established empire of movie theatres and studios contributed a great deal to the further development of Indian cinema. Many stars as well as film projects owed their renown to the long shadow cast by Irani’s efforts. Apart from this, his introduction of several innovations over the course of his filmmaking efforts changed the face of Indian cinema forever.

For instance, films at the time used to be shot in natural light, making crews naturally reliant on unstable weather conditions. When Ardeshir Irani started shooting under artificial lights in studios, film shooting suddenly became both economical, and a lot more convenient. In 1934, he also made Noor Jahan, the first Indian film in English. Yet another leap towards how we view cinema today was made by Irani: he made the first colour film in India, titled Kisan Kanya in 1937.  His contribution to cinema is so massive that it cannot be brought under the scope of a single language or nationality. He made films in languages ranging from Hindi, Gujarati and Marathi to Telugu, Burmese, Farsi and English.

Over his prolific career, Irani produced nearly 250 films, of which around 150 were silent films. He took on the mantle of director for approximately 20 films, and wrote the scripts for even more. In 1937, he founded the Indian Motion Films Producer Association and became its first President. Acknowledging his significant contribution to cinema, the British government of India bestowed upon Ardeshir Irani the title of ‘Khan Bahadur’. The last film he produced was Pujari, in 1946. On 14 October 1969, Ardeshir Irani passed away at the age of 82.