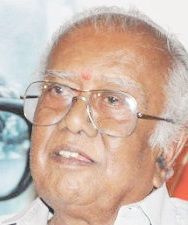 Born Lakshman Rao Mohite on 15th June 1932, to a father who was with the Cavalry Regiment of Mysore State Troops – Mysore Lancers – he was better known by his nom de plume, Geethapriya. He charmed the film world both with his directorial talent as well as being one of the finest lyricists.

Though Marathi born, the young lad was influenced by the Kannada poet Pu Ti Narasimhachar, who resided in the same quarters as his family, thereby giving wings to the boy’s poetic ambitions and interest in all things Kannada.

Geethapriya, a CA Intermediate pass, however, took to assignments that involved writing, and though he was employed as a clerk in Cubbon Park restaurant, earning a modest monthly salary of Rs 35, his poorly status did not come in the way of his more ambitious dreams.

Geethapriya, who has directed 40 films and penned over 250 songs in Kannada films, and received the Puttanna Kanagal Award for his contribution to Kannada cinema as a director, was also inspired by the writings of such Kannada literary stalwarts as K Shivaram Karanth, Masti Venkatesh Iyengar, T R Subba Rao, and A N Krishna Rao. He tried his hand at writing from his middle school days itself, sending his poems and short stories to magazines like Thaayinaadu, Ramarajya.

His brief association in theatre saw him in the company of music director Vijaya Bhaskar and film director M B Singh as friends. He took to being a lyricist in 1954 being promised a handsome Rs.40 a month, by Vijaya Bhaskar.

Geethapriya directed his first film in 1968 with Mannina Maga with Rajkumar and Kalpana playing the lead roles and which went on to bag the coveted National Film Award for Best Feature Film and Karnataka State Film Award for Best Screenplay. The film ran for 100 days in Kapali and Bharat theatres.