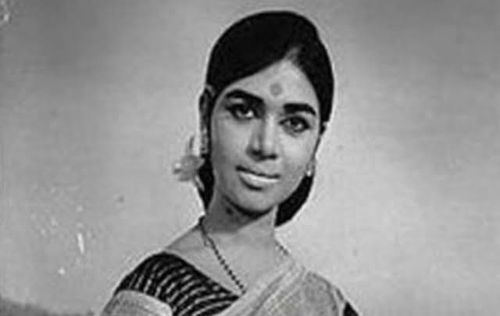 Like the ‘Twinkling Star’ sobriquet she was feted with, Kalpana, blazed a glorious trail over a brief period of 35 years before she was snatched away by death. Critically acclaimed as one of the finest actresses to grace the Kannada screen, Kalpana was born as Sharat Lata on July 8 1913 to a Tulu speaking couple, Krishnamurthy and Janakamma, in Dakshina Kannada district. As a child, she was so passionate about acting that she took part in virtually all the talent competitions held at her school. Commercially and critically appreciated for her performances, and boasting a huge fan following, Kalpana was also known for her distinct sartorial style, always setting trends with the outfits she wore. A fashion icon, her mega sleeve blouses, elaborate hairdos, large rings, rich zari and chiffon saris and long necklaces emerged as iconic statements at the time.

Kalpana along with her younger brother and mother shifted to Davangere from Uttara Kannada to experience the basics of film and stage performances. While there, she met Shiv Kumar, who took her to Madras, where the eminent director producer B R Panthulu gave her a role as the lead in Saaku Magalu (1963). This proved to be her big break, a veritable springboard which facilitated her further career in movies. In a career spanning the early 1960s to the late 1970s, Kalpana was featured alongside the thespian Dr Rajkumar, besides of course working in a few Tamil, Tulu, and Malayalam and Telugu films as well. Most of her films were female-centric that provided her ample scope for her sterling and riveting performance.

Sharat Lata had taken the screen name Kalpana as her ambition of working in films fructified. It was the 1967 Belli Moda by Puttanna Kanagal that brought her to the forefront. She thereon dominated the Kannada film industry during late 1960s and 1970s with author-backed roles in movies like Sharapanjara, Gejje Pooje (1969), Belli Moda (1967), Eradu Kanasu (1974), Kappu Bilupu (1969), Bayalu Dari (1977), Gandhada Gudi (1973) and Bangarada Hoovu (1967). She worked with almost all leading actors and directors of the time. Her most frequent co-stars, aside from Dr. Rajkumar, were Gangadhar and Udaya Kumar. She gave stiff competition to her contemporaries such as Jayanthi, Bharathi and Chandrakala among others.

She also acted in few Tamil and Telugu movies such as Madras To Pondicherry (1966) and Sadhu Mirandal (1966). These films were later made in Hindi as Bombay to Goa (1972) and Sadhu Aur Shaitaan (1968). Both films were very successful at the box office. She also acted in Koti Chennayya (1974), a Tulu movie, directed by K Shivaram Karanth. She acted in the Malayalam movie School Master (1964). In a short film career of 15 years, she acted in over 80 movies, the majority in Kannada.

Kalpana’s turn as Kaveri, a spirited woman confronting mental trauma, in the multi-award-winning film Sharapanjara in 1971 was much appreciated, and won her the Karnataka State Film Award for Best Actress that year. This also saw her cement a close relationship – both personally and professional with the veteran director Puttanna Kanagal that made headlines way back in the 1970s. Many of their films had strong, hard-hitting messages which were treasured in the cinema history. Kanagal so personally groomed Kalpana that though they were romantically linked by media, industry people are unanimous that their relationship was one of master and pupil. The two fell apart when Kanagal refused to offer her the pivotal role in Nagarahaavu (1972), and Kanagal went on to groom Aarathi while Kalpana featured in some average films later on.  Her efforts to revitalize her career failed. Even though her later movies with Rajkumar (Daari Tappida Maga, 1975 and Eradu Kanasu), and Anant Nag (Bayalu Daari) were hits, however, they failed to resurrect her career.

By 1977 Kalpana had no movies in hand. She then started focusing on drama companies in Uttara Karnataka and mainly worked in Gudigeri Basavaraj's drama company. With mounting debts and declining film offers, she went into deep depression. She died under mysterious circumstances soon after. Her suicide was attributed to multiple causes from health issues, poor financial condition to failed romance, though nothing was established. Post-mortem reports suggested she had consumed 56 sleeping pills. She spent her last days at an inspection bungalow at Gotur near Sankeshwar, Belagavi, Karnataka.