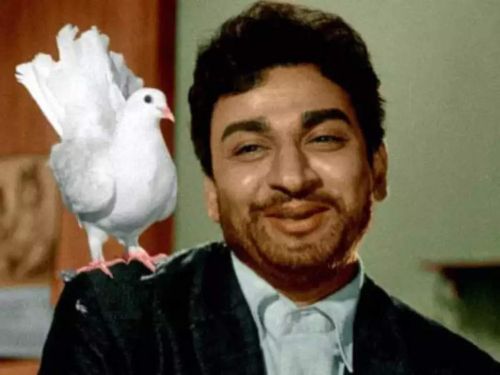 April 24, 1929: an epochal day for the quaint hamlet of Gajanur in Talavadi Taluk. On this momentous day, Puttaswamy and Lakshmiamma, impoverished theatre artists from Singanallur, welcomed their son Muthuraju into the world. The same Muthuraju would go on to reign over Kannada cinema for nearly 50 years. Having honed his skills in theatre, Muthuraju as Dr. Rajkumar would come to be identified with all things Kannada—language, culture, identity and a beacon of hope for all Kannadigas who look to him to champion their cause. Fondly addressed as ‘Anna’ or elder brother, he was the epitome of simple living and humility. Many others called him Nara Saarvabhouma (Emperor of Actors), Bangarada Manushya (Man of God) and Vara Nata (Gifted Actor).

Dr. Rajkumar was named Muthuraja at birth after the Muthaththi Raya (a name for the Hindu deity Hanuman), a temple deity located in Muthathi, a settlement on the banks of the river Kaveri in present-day Karnataka. Rajkumar stopped his schooling when he was eight years old, and was discovered by film producers who cast him in bit roles till he was 25. He started his career with his father in a troupe led by Gubbi Veeranna. In 1953, he was spotted by the film director H.L.N. Simha, who was on the lookout for a well-built, pleasant young man for Bedara Kannappa (1954). Simha signed him on and rechristened him ‘Rajkumar’ for the screen. Before this, he appeared in Sri Srinivasa Kalyana (1952) as one of the seven sages (Saptarishi) in a small role.

At 24, Rajkumar married his 14-year-old cousin, Parvathamma, on June 25, 1953 in Nanjangud. The first family of Kannada film industry as they were addressed had five children; sons Shiva, Raghavendra and Puneeth, and daughters Lakshmi and Poornima. After marriage in a joint family that included 24 children in Madras, the family moved to Bangalore in 1972, following which Rajkumar began getting multiple film offers.

Thereafter Rajkumar worked in over 220 films essaying a variety of roles and excelling especially in portraying mythological and historical characters in films such as Bhakta Kanakadasa (1960), Ranadheera Kanteerava (1960), Satya Harishchandra (1965), Immadi Pulikeshi (1967), Sri Krishnadevaraya (1970), Bhakta Kumbara (1974), Mayura (1975), Babruvahana (1977) and Bhakta Prahlada (1983). Along with contemporaries Udaya Kumar and Kalyan Kumar, the three came to be known as the Kumara Thrayaru of Kannada cinema.

Since he was trained in classical music during his theatre days, Rajkumar also became an accomplished playback singer. Known for his excellent diction, he started singing for his own films since 1974. The songs Yaare Koogadali, Huttidare Kannada, Hey dinakara, Hrudaya samudra and Naadamaya mesmerized his fans. Apart from singing for films, Rajkumar regularly performed Carnatic music on stage as well. Most of his duets were sung with S Janaki and Vani Jairam. He frequently collaborated with the music director duo Rajan-Nagendra. He won the National Film Award for Best Male Playback Singer for Naadamaya, which was based on the Todi raaga. His songs were known for their strong focus on the Kannadiga identity. He also sang an English song for the film Operation Diamond Racket (1978).

A strict and highly disciplined person, Rajkumar was also a practitioner of yoga and pranayama. His yoga regimen ensured he was fit, and remained so when he was in captivity for 108 days in 2000 following his abduction by the sandalwood smuggler Veerappan and his henchmen.

Rajkumar acted primarily in Kannada language movies apart from Kalahasti Mahatyam (1954) in Telugu, a remake of Bedara Kannappa (1954). He owned a production company called Sri Vajreshwari Combines under the banner Dakshayani Combines.Bhaagyada Baagilu (1968) (Kannada) was his 100th film. In 1988, he starred in Devatha Manushya (1988), his 200th film. He last appeared onscreen in Shabdavedi (2000) (Kannada).

The famous Bollywood actress Rekha made her debut in Operation Jackpotnalli C.I.D. 999 (1969) with Rajkumar as well. He was the first Indian actor to don the role of James Bond in Jedara Bale (1968). Later, in Operation Jackpotnalli C.I.D .999, Goadalli C.I.D. 999 (1968) and Operation Diamond Racket (1978) he played roles chronicling the adventures of Prakash aka Agent C.I.D. 999, a James Bondesque superspy. Much of these films were made by the director duo Dorai and Bhagwan who began making spy thrillers late in their career.

Rajkumar’s subtle acting, spontaneous style and flair for giving reel characters real credibility saw him capture all audiences irrespective of age, caste, class, economic strata, and survive the onslaught of time, age and changing demands of the film world. A strong votary of the Kannada language and identity, he confined himself mainly to the Kannada film world through a conscious decision. His films were credited with bringing a sense of unity among the diverse regions of Karnataka.He became actively involved and the face and force behind the Gokak movement taking out a rally from Belagavi to Bengaluru. Such was his charisma and sincerity that the government of the day relented and made Kannada a compulsory language of education in Karnataka.

He received a plethora of film, State and National awards in his career. He won eight Filmfare Awards (South) for Best Actor for the films – Gandhada Gudi (1973), Mayura, Shankar Guru (1978), Keralidha Simha (1981), Shravana Banthu (1984), Ade Kannu (1985), Bhagyada Lakshmi Baramma (1986) and Akasmika (1993). He won eleven Karnataka State Film Awards (nine for Best Actor and two for Best Singer). He was awarded the Karnataka Ratna award by the Government of Karnataka in 1992. He was awarded the Padma Bhushan in 1983 and the Dadasaheb Phalke Award in 1995.