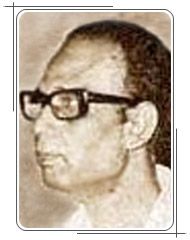 As a music composer for Hindi cinema, Kanu Roy’s tunes have gained him some redoubtable fame. While his tunes were so popular they are still remembered, very few remember his name to this day.

Kanu Roy’s led a life of struggle and poverty until his dying breath in 1982. Born in Calcutta, it is said that Kanu Roy moved to Bombay to become a playback singer. He also joined IPTA and soon started working as one of its music directors. It was there he met Salil Chowdhury. Some sources claim that he sang a few songs for the renowned composer in the late 1950s, and even assisted him in music direction. Based upon Salil Chowdhury’s advice to branch out as an independent music director, instead of a playback singer, Kanu Roy continued his struggle to find a suitable opportunity.

While doing odd jobs as a driver or a welder—he had reportedly also worked on the repairs of the Howrah Bridge in Calcutta previously—Kanu Roy sang in the chorus for Anil Biswas. He continued to scrape by for nearly another decade until he was offered a movie by his friend Basu Bhattacharya. Uski Kahani (1966) marked Kanu Roy’s debut. Basu Bhattacharya was known to make movies on extremely tight budgets and would involve friends to take care of certain aspects of filmmaking so that the costs could be kept low. In an interview in 2012, Gulzar, a close friend of Basu Bhattacharya and Kanu Roy, mentioned that Roy would not be provided more than six or eight musicians to work with. No amount of pleading to be provided with more instruments would work – Roy would simply be told make any arrangements he required with his own admittedly scarce resources. In fact, even the recordings would be conducted at the Bhansali recording studio in Tardeo three or four hours before the start of the regular recording hours. With only four instruments available to him - vibrophone, tabla, flute and taar shehnai he could compose a classic like Meri jaan mujhe jaan na kaho.

Despite such constraints, the songs that Roy composed for Bhattacharya have attained immortality. Aaj ki kali ghata, the lilting melody from Uski Kahani is still remembered and so are the melodious numbers from Anubhav (1971). Meri jaan mujhe jaan na kaho, Koi chupke se aake, Mera dil jo mera hota have mesmerized listeners for over four decades with their lilting melodies with minimal orchestration and of course Geeta Dutt’s impeccable singing. He is credited with giving Geeta Dutt some of her last memorable songs before she passed away.

A reclusive, introverted person by nature, Kanu Roy did not get much work outside Bhattacharya’s movies, since he was unwilling to approach other people and ask for opportunities. Through the 1970s and early 80s, Roy composed for movies such as Aavishkar (1973), Griha Pravesh (1979), Sparsh (1980), Woh Phir Nahin Ayi (1981), and Mayuri (1985). The music of Aavishkar and Griha Pravesh both were much appreciated – Hansne ki chah ne kitna mujhe rulaya hai ( Manna Dey) and Naina hain pyase mere (Asha Bhosle), Babul mora naihar chhooto jaaye (the timeless Wajid Ali Shah composition, sung by Jagjit and Chitra Singh) are popular to this day.

For Mayuri (1985), Roy collaborated with the legendary actress Nutan who sang the songs and provided lyrics for the same. While Nutan may not have been a professional singer, the score of Mayuri received much acclaim.

Unmarried and struggling to meet his ends meet, Roy died of cancer in December 1982. His death, unfortunately, went largely unrecognized and unacknowledged by leading newspapers and magazines of the time.