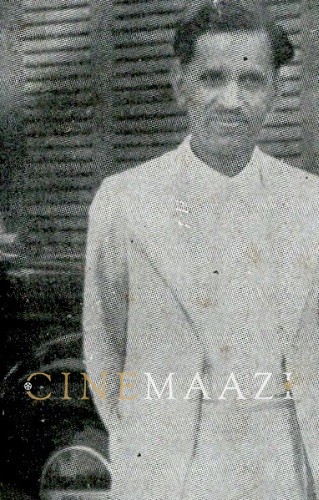 Simple living and high thinking—this is how Messrs. Desai & Co. was started. It was a clue to their business acumen and consistent efforts that starting with nothing much to-boast of they have to-day brought their concern in line with the best distributors of India.

Besides possessing a sharp business sense, the Desai brothers have a very genial disposition which has endeared them to the press and the exhibitors alike. It is generally seen that on getting a few good successes to their credit and a fat contract in the pockets some of the distributors easily develop a swell but no success, however grand, can turn the head of the Desais. They always remain the same old friends after Jailor (1938) and Divorce (1938) — ever-smiling, ever obliging and ever cordial.

During the chase for Jailor (1938), the mighty success of Minerva, there was a lot of fuss; some of the concerns went so far as to announce the news of its capture, but a trip to Bombay and Mr. L. D. Desai put the lion thunderer on the Cinema tanner. Desais have their own peculiar ways of doing work. They preserve the silence and shrewdness of business. The recent speculation on Pukar (1939) did not move them at all. The bid reached fancy figures and yet Mr. Desai sat calmly in his chair involved in his own calculations. And a few days later we joined his friends in congratulating the Desai brothers in their brilliant triumph in securing Pukar (1939). Although they had to pay a sum of one lakh of rupees, the highest sum so far offered for any picture in India, we have all hopes that the luck of Desai and the popularity of Minerva will not fail them in Pukar and that it will beat all previous successes of Minerva.

They say Desais have been very lucky for Minerva, but we believe that the clever exploitation and ungrudging cooperation of Desai & Co. have been to a great degree, responsible for the success of Minerva in these parts.

Both Desai and Modi have a craze for publicity and they have successfully proved that with the proper booming a good picture can give better results. We hope the other distributors will get the tip from Messrs. Desai & Co. and help their principles in coming to the forefront Publicity these days is a mighty weapon and both Desai and Modi realize its importance.

The phenomenal success of Jailor and Divorce is sufficient proof.

Of the four big box-office successes of the year 1938-39 two were the contributions from Minerva and both of them were Desai releases.

As already said, Desai & Co. today is one of the biggest distributing offices in Northern India controlling as many as four companies, Minerva, Prakash, Bavnani, Chandra Art, not counting the numerous Republic serials.

After Divorce, releases Hero No 1 of Prakash, a great fighting picture will Jayant in the lead.

And for the coming winter, Desai & Co will give the biggest of its releases in Pukar to the Lahore public.

One picture a month; that is their speed and there is no doubt that it is a very good speed.

[This is a reproduction of a report on Desai & Co. published in the film magazine Cine Herald]