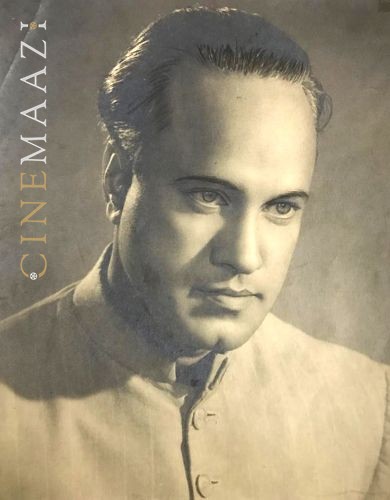 Muhammad Ismail (M. Ismail) was considered as the harbinger of cinema in Northern India. A charming and rustic personality, M. Ismail was endearingly called Bhaiyya Ji in film circles. Ismail performed the roles of kind-hearted, forgetful, careless and sometimes cynical men to perfection. He also performed villainous roles in many films. M. Ismail, with his motor mouth, his sagging cheeks, and his prominent and protruding jowls, utilized a tremendous range of expressions, which aided him in doing old men’s roles at very early in his career. He is best known for his roles in movies like Heer Ranjha (1932), Yamla Jatt (1940), Khazanchi (1941) and Zamindar (1942).

M. Ismail was born in 1902 in a Rajput family of the Bhati Gate area of Lahore. He was well built, fair-complexioned and had blue eyes. Most of his family members were goldsmiths. Ismail started earning his livelihood by working as a golden calligrapher. He was a professional calligraphist who also prepared posters and paint boards for silent films occasionally. Abdul Rashid Kardar and M. Ismail, the two enthusiastic of Bhati Gate Lahore started their first publicity group and named it ARME Artists. They arranged a movie camera from Shankar Das Photographers and made their first experimental movie in which Master Ghulam Qadir, M. Ismail, and A. R. Kardar were in the lead cast.

Both of them collaborated with Gopal Krishan Mehta, an officer with North Western Railways, who had acquired cinematography training from Germany and established a film production house named Premier Film Company. G.K. Mehta directed Daughters of Today (1928), the first silent film, produced under this banner. Master Ghulam Qadir and Vilayat Begum were in the lead whereas A. R. Kardar appeared as villain and Ismail was in the character role. The film was started in 1924 but financial and other constraints delayed its completion for three years.

In the meantime, Ismail played the villain Kaido and Kardar did a side role in the film Heer Ranjha alias Hoor-e-Punjab (1929) produced under the banner of Imperial Film Company Bombay. But they could not work longer in Bombay as the work conditions weren’t conducive. They returned to Lahore to pursue a career in film-making, which was to credit them as bellwethers of the film industry in northern India. With no work left, A.R. Kardar and M. Ismail sold their belongings to set up a studio United Players Corporation, Lahore. Eight silent movies were produced under this banner and Ismail acted in four of these films Mysterious Bandit / Farebi Daku (1931), Safdar Jung (1930), Farebi Shahzada / Shepherd King (1930) and Khooni Katar / Golden Dagger (1931) establishing himself as a character artist.

Hakim Ram Parshad, known as King of Cinemas in Lahore, invited A.R. Kardar from Bombay and set up a film production company Playart Photo tone. The first film produced was Heer Ranjha (1932) under the direction of A.R. Kardar. Anwari Begum and Rafiq Ghaznavi were in the lead roles of Heer and Ranjha respectively. M. Ismail played the character of Kaido, the intriguing uncle of Heer. The film tanked at the box-office. Then, he played an important role in Raja Gopi Chand (1933) directed by B. M. Shukla. By now he had established himself as a leading villain in the talkies.

His contribution to Punjabi Cinema in the formative years was of great importance. He repeated the role of Kaido yet again in his first Punjabi film Heer Syal (1938), with his characteristic style. M Ismail was by now a seasoned actor of Lahore, a man whose career dated back to the silent era of the early 1920s. He was cast in a major role of Mitthu in Pancholi Art Pictures’ Gul Bakawali (1939). He played the important character role of Fattu in the Punjabi film Sohni Mahiwal (1939). In Dalsukh M Pancholi’s film Yamla Jatt (1940) he played the role of the sober gentleman Dhanna Jatt. He was in the main role of Raja Pratap Singh in Gowandhi (1942).

After partition, he migrated to Pakistan and worked in more than 100 Pakistani films, mostly as the father of the hero or heroine. Hichkole (1949) was his first film in Pakistan. Then, he got offers from many reputed filmmakers like Nazir, Anwar Kamal Pasha, and Luqman, etc. His repertoire of hit films included Pherey, Larey, Shehri Babu, Ghulam, Gumnam, Qatil, Patan, Inteqam, Mehbooba, Qismat, Paigham, Patey Khan, Zehr-e-Ishq and Dulla Bhatti, etc. In Qismat, he played a unique role of a man, who is too forgetful to even remember his own name. It was a hilarious performance from a truly talented actor of his times. M. Ismail got the Presidential Award for this role. He was last seen in Urdu film Arzoo (1975) while his last Punjabi film Maan Jawani Da (1976) was released after his death.