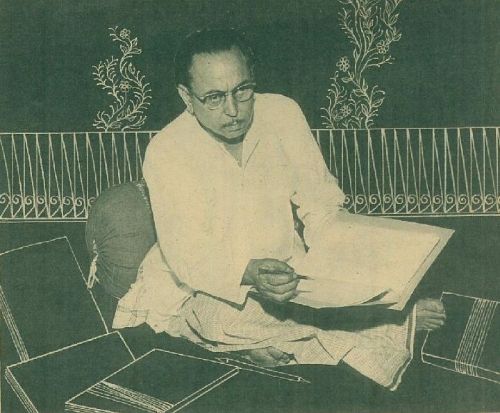 Screenwriter and director, Mohammed Sadiq was born on 2 March 1911 in Lahore in a family of small trader. After passing his matriculation examination in 1927, he got a job as a clerk-cum-telephone operator in the Chief Mechanical Engineer’s office in Kenya and Uganda Railways and Harbours Administration. The job took him to Nairobi where he spent two years earning a salary of 150 shillings a month. Family problems then brought him back to Lahore in 1930, where he joined producer A R Kardar’s United Players Corporation as a clerk.

Kardar’s concern folded up in 1931 and Sadiq spent the next four years doing a variety of odd jobs. Picking and quitting, according to the pressure of the moment, one job after another, he served variously as typist, daybook writer in a bank, lithographer and press compositor. A stutterer since childhood, he was cruelly ridiculed whenever he spoke. This taught him to speak only when he must.

He was working as the head clerk in a concern called Lakshmi Petroleum Company when A R Kardar, who was then directing films in Calcutta, took him to Calcutta as his assistant. Sadiq thus started his film career under Kardar in 1935. The first film with which he was associated was Baghi Sipahi (1936). [though there are some sources that says Sadiq assisted Kardar in his first talkie film Heer Ranjha (1932) and thus it should be his first film]

Sadiq assisted Kardar in Calcutta in two more films and towards the end of 1937 came to Bombay where Kardar was directing Baghban (1938).

After Baghban, Sadiq followed Kardar to Ranjit Film Company for whom the duo made two films, Thokar (1939) and Holi (1940). On these two films, besides assisting Kardar in direction, Sadiq also wrote the story and dialogues for the films. He assisted Kardar in four more films one of which, Pooja (1940) starring Sardar Akhtar, was also written by him. By this time Sadiq was already one of the key assistant directors along with S U Sunny.

In 1942, Kardar launched his own Kardar Productions and made Sharda (1942) where Sadiq worked as the film editor. Sadiq got his first assignment to direct the film Namaste (1943) that became a silver jubilee hit. He next directed Jeevan (1944) with S U Sunny for Kardar which was followed by Rattan (1944) for producer Jaimini Dewan. Rattan became a wildly popular film that broke box office records and made Sadiq a well-known name.

In 1959, Guru Dutt started working on Chaudhvin Ka Chand (1960). Being a Muslim social, he wanted the film to be directed by a Muslim director who was well-versed in Lucknowi etiquettes. So, he approached M Sadiq to direct the film. The film, a love triangle with most beautiful songs and performances by artists (Waheeda Rehman, Guru Dutt and Rehman) was a smashing hit. The film won him Bombay Film Journalists’ Association’s Best Director Award.

Though Chaudhvin Ka Chand was successful but it didn’t bring Sadiq more projects until Taj Mahal (1963), a historical that created  history at the box-office with its success and provoked several producers to drop the contemporary themes and rush to the brittle pages of medieval history. Sadiq did not stop here. He made two more films, Zenith productions’ Noorjehan (1967), a historical starring Meena Kumari and Pradeep Kumar and Sanamkada’s Bahu Begum (1967), a Muslim romance starring the same cast. Unfortunately, both the film did not fare well at the box office despite good music.

In 1970, M Sadiq moved to Pakistan and directed his last film Baharon Phool Barsaao (1972) under his own banner Sadiq Productions. Due to lack of cooperation from one of his cast members, the film was delayed and M Sadiq did not live long after that and passed away on 3 October 1971. After M Sadiq’s tragic and untimely demise, Hassan Tariq completed the film. The film revolved around nawabs, their luxurious lifestyle, desperation for male heir, betrayal and separation; was tightly-knit and did well at the box office.

The Stars of Yesteryears - Nand Kishore