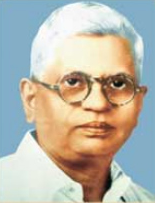 Shankarrao Vyas’s musical persona was a blend of different elements of musical activity—besides being a reputed vocalist, and an expert in instrumentation, he was also a gifted composer and a scholar of significance. Although adept in the tradition of old masters, Vyas was a musicologist of modern outlook, which is seen in his compositions in film music. He amply proved that classical music could well serve the needs of cinema. He experimented with new styles based in the classical tradition, pioneering the trend of using indigenous music idioms for films. He also systematically experimented with orchestration in Indian music. Between 1937 and 1954, he composed music for approximately 32 Hindi films, five Marathi films and three Gujarati films. Some of the Hindi films he composed for include Poornima (1938), Bijli (1939), Ek Hi Bhool (1940), Bharat Milap (1942), Kavita (1944), Ghunghat (1946), Mera Geet (1946), Valmiki (1946), Bhakta Dhruva (1947), Vikramaditya (1948), Ram Vivah (1949), Jivan Nauka (1952), Indrasan (1952), Hari Darshan (1953), Mahapooja (1954), Ramayan (1954), and Ganga Maiyya (1955). Vyas’s compositions are a blend of poetry, melody and rhythm.

Born on 23 January, 1898 in Kolhapur, young Shankar enrolled at the Gandharva Mahavidyalaya, joining the gurukul system of music education initiated by Pandit Vishnu Digambar Paluskar. Vyas learnt music from Pandit Vishnu Digambar Paluskar, who is acknowledged as one of the greats of Hindustani music who also found the Gandharva Mahavidyalaya. Pandit Paluskar’s promising pupil, young Shankar displayed talent and diligence at an early age, and also became adept at repairing musical instruments. He was awarded a degree – Sangeet Pravin. Excelling in vocal as well as instrumental music, while still a student he was deputed to Lahore by Paluskar, to handle the management of the music school there. Post completing his studies, Shankarrao Vyas settled down in Ahmedabad, founding the Gujarat Sangeet Vidyalaya, as well as another school of music affiliated to the Gandharva Mahavidyalaya. He essayed a key role in popularising classical music through the local National Institute of Education which was being conducted by Mahatma Gandhi.

While Pandit Paluskar had started a movement to popularise music among the masses, his demise in 1931 threw up several challenges impacting the future of the Gandharva Mahavidyalaya and its related institutions. At this point, Vyas, along with Pandit Khare, rose to the challenge, bringing together all the past alumni of the parent institution. They set up a general council, the Gandharva Mahavidyalaya Mandal to co-ordinate the work of the Mahavidyalaya, to continue the traditions laid down by Pandit Paluskar.

Shankarrao Vyas’s work in films shows that along with being well-versed in the tradition of the old masters, he bore a modern outlook, incorporating classical music to meet the requirements of film music. He experiments with new styles with a grounding in classical music are seen in his musical scores for Bharat Milap (1942), Ram Rajya (1943), Vikramaditya (1945) and other films. Using the indigenous music idiom for cinema was no less than a pioneering feat, even as Vyas put his own ideas on orchestration in Indian music into practice. His compositions thus blended poetry and melody with rhythm.
He also composed music for Gujarati films such as Bhakta Surdaas (1947) and Narsi Mehta (1947), as well as Marathi films such as Bharat Bet (1942), Sasurvaas (1946), Mi Daru Sodli (1950) and Sudamya Che Pohe (1958).

His musical work Vyas Kirti is a collection of over 350 compositions. He was also instrumental in writing Bandish in various Indian classical music ragas.

Regarded as a ‘traditionalist among reformists and reformist among traditionalists’, Shankarrao Vyas was known to have a placid temperament, untouched by the petty jealousies of musical coteries. Affable and cultured, he unfailingly advised and encouraged those who sought his guidance.

Shankarraro Vyas also penned books such as Prathamik Sangeet, Madhyamik Sangeet, Sitar Vadan, Murli Naad and Vyas Kirti, which are used by the student community as reference manuals. He also started the magazine – Sangeet Kalavihar. In order to further the objective of popularising Indian classical music among the masses, he and his brother Pandit Narayanrao Vyas set up the Vyas Sangeet Vidyalaya music school in 1937 in Dadar, Bombay.

Shankarrao Vyas passed away on 17 December, 1956 in Ahmedabad, Gujarat.