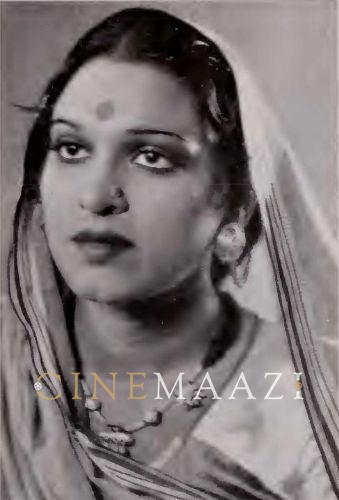 Also known by the title – Kannada Kokila, Amirbai Karnataki was an early Kannada singer-actress who also became popular in Hindi cinema. She sang no less than 380 songs in 150 films, including the evergreen Main to pavan chali hoon bole papiha, Bairan nindiya kyon nahi aaye, O jaane waale balamwa laut ke aa, Dheere dheere aa re baadal, and Priya madhuvanadali. A prominent name during the 1930s and 40s, she shone along with stars like Shamshad Begum, Noor Jehan, Suraiya, and Zohrabai Ambalewali. Mahatma Gandhi was also an ardent fan of her rendering of Vaishnav janato.

Born in the year 1906 in Bilgi town, Bijapur District, she hailed from a family of artistes. Her parents Ameenabi and Husensaab not only worked for a theatre company but also ran one for many years. One of six siblings, Amirbai grew up amidst music and theatre, with many of her uncles and aunts also being leading musicians and theatre actors. The Sangeet Natak tradition was flourishing at the time in the Bombay Presidency, and many theatre companies, including the well-known Balgandharva’s drama company, camped at Bijapur, which was part of the same subdivision. Amirbai and her sister Goharbai, who were already trained in classical music, were hired by the theatre companies to both sing and act onstage.

Drawn to the hub that was Bombay, Amirbai possibly moved to the city in 1931. These were times when women who worked in films, theatre and music were largely looked down upon. Fighting the stigma, she went on to achieve name and fame in the course of her career. Helped by her actress sister Goharbai, she landed a role in the film Vishnu Bhakti (1934). However, she was to achieve popularity only with the release of Bombay Talkies' Kismet (1943). The songs, composed by Anil Biswas, became extremely popular, making Amirbai famous. She worked in several films through the 30s and 40s including Bharat ki Beti (1935), Prem Bandhan (1936), Narsi Bhagat (1940), Darshan (1941), and Bharat Milap (1942).

Fluent in Kannada which was her mother tongue,  Madhure veene madhure veene prema rendered in the Mishra Pilu Raga from Chiranjeevi (1936), was her first song in a Kannada cinema. In 1952, she played the role of Bakular Devi in Srinivasa Kalyana (1952) and lent her voice for four songs. She also sang devotional and love songs for Asha Nirasha (1954). Olidare mana hai olidare manadaparaadhavenu?, the tune of this love song was also heard in the classic Hindi film Mughal-e-Azam's Jab pyar kiya toh darna kya. She was also fluent in Gujarati and her rendering of Mahre te gamray ek baar aawjo from the Gujarati film Ranakdevi with music composer Avinash Vyas became popular. She even sang a popular qawwali for filmmaker Shaukat Hussain Rizvi’s Zeenat (1945).

By 1947, she had reached the high point in her career. She would earn Rs.1000 per recording as opposed to the Rs.500 that other singers were paid for rendering a song. She also built a theatre Amir Talkies in Bijapur, and also travelled across North Karnataka giving programmes related to theatre and cinema. Switching to character roles in her later years, she also composed music for Wahab Pictures' Shahnaz (1948).

On the personal front, she was married to Parsi actor Himalayavala. It ended amidst allegations of physical and mental abuse, post which Amirbai remarried Badri Kanchawala, Editor of Paras.

Amirbai Karnatki passed away on 3 March, 1965, after suffering a paralytic attack. She was 55.