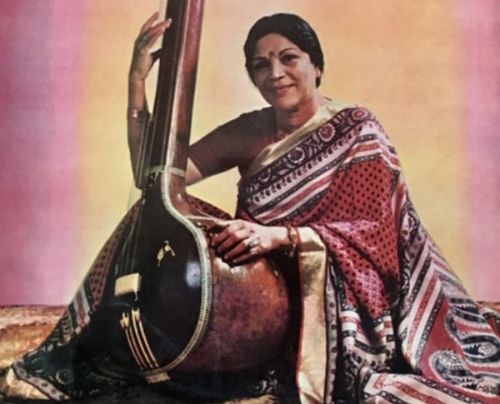 Widely regarded as the Queen of Thumri, Indian classical music singer Shobha Gurtu was renowned for her earthy, individual vocal style, and her stunning expertise across musical genres. She borrowed aspects from the Purab style to create a style that was unique. Over a long and illustrious career that lasted five decades, she performed at concerts across the world, as well as for Hindi and Marathi cinema. Among the well-known songs she rendered for films are Bandhan bandho in Pakeezah ((1972), More saiyaan bedardi in Phagun (1973), and Saiyyan rooth gaye in Main Tulsi Tere Aangan Ki (1978), which would be played regularly on the radio, taking her vocal expertise across the land. She was honoured with numerous distinguished awards such as the 1987 Sangeet Natak Akademi (National Academy of Music, Dance, and Drama) award for vocal music, one of the Indian government’s highest civilian awards— the Padma Bhushan—for her contributions to the arts in 2002, the Lata Mangeshkar Puraskar, Shahu Maharaj Puraskar, and the Maharashtra Gaurav Puraskar.

She was born Bhanumati Shirodkar on 8 February, 1925, in Belgaum to Menakabai Shirodkar, a professional dancer and traditionally trained singer, who first initiated her into classical singing. Trained to sing from an early age, her formal music training occurred under Ustad Bhurji Khan, youngest son of Ustad Alladiya Khan, who was the founder of the Jaipur-Atrauli gharana in Kolhapur, and from whom her mother had herself learnt classical singing. She further went on to train under Ustad Alladiya Khan's nephew, Ustad Natthan Khan, followed by Ustad Ghamman Khan.

Trained in the classical khayal form, she found her calling in light classical genres, excelling in thumri, dadra, kajri, hori, and ghazal in the semi-classical form and was soon performing on stage. She was influenced by musical greats such as Begum Akhtar and Ustad Bade Ghulam Ali Khan. Her rich and earthy vocal quality was aptly suited to light classical music. Melding pure classical passages into her singing, Gurtu created a new form of music, becoming a stellar exponent of thumri. She created a special place for herself in the realm of thumri. She took on the name Shobha Gurtu after she married Vishwanath Gurtu, who was the son of noted sitar player and scholar, Narayan Nath Gurtu, who also went on to influence her style.

Known to prefer Lord Krishna Shingara and Kabir's philosophical rendering, on stage she was always Radha. Audiences would be transported back centuries with her renditions of the Sufi saints. Collaborating with Pandit Birju Maharaj, she created a unique mood on stage.

However, she did not particularly enjoy singing in films; she far preferred performing in classical music concerts. The fixed scale and metre of the raga in film music restricted the way she could use bandish to modulate a thumri. She evidently preferred to ‘outrun’ the song, as it “trailed her improvisation”.

Recording and performing widely across India, she was also a well-known broadcaster and television entertainer. Among her non-film albums, At Her Best…Shobha Gurtu displayed her stunning classical singing in the Purbi Gayaki tradition. She also performed as a guest on three collaborative jazz albums recorded by her youngest son, percussionist Trilok Gurtu, while her ghazal album Tarz with Mehdi Hassan was also popular. She is also remembered for featuring in the Jana Gana Mana video released to mark 50 years of the Indian Republic, wherein she rendered the Indian National Anthem, alongside other leading Indian classical singers and musicians. She travelled across the world for concerts, including a prestigious one at the Carnegie Hall, New York City, where she performed along with musical greats such as Pandit Birju Maharaj.

She received several honours over the course of her career, including the Sangeet Natak Akademi (National Academy of Music, Dance, and Drama) award for vocal music and the prestigious Padma Bhushan, one of the Indian government’s highest civilian awards, for her contribution to the arts.